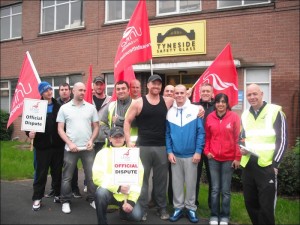 Unite members at two sites of Tyneside Safety Glass in Gateshead which makes laminated glass, are on strike this week over ‘a paltry and insulting’ pay offer.

About 112 workers have been on strike since Monday, June 16th at the Kingsway and 7th Avenue sites on the Team Valley Industrial Estate.

The strike is from 05.00 to 19.00 each day and also includes a continuous overtime ban.

Unite said that the company could well afford to be more generous, especially as it awarded the highest paid director a 14 per cent pay rise last year and shifted £750,000 from the company’s account to the owner’s trust fund.

The company had offered a three-year deal – three per cent in the first year, and then two per cent in the two subsequent years – but Unite said that this deal had strings attached to make the deal self-funding.

Unite regional officer Fazia Hussain-Brown said: “Our members rejected the paltry and insulting ‘strings attached’ deal by more than 90 per cent as the company was giving with one hand and taking with the other.

“Our hardworking members and their families are faced with the continuing cost of living crisis, with household bills going through the roof and they deserve a more generous pay deal.

“Tyneside Safety Glass claims that it has no money for a pay rise for its employees, but it seems to have plenty of cash to give to one of its directors and to lavishly top up the owner’s trust fund.

“The management’s plea of poverty does not ring true and we urge them to get around the table urgently to negotiate a fair and equable settlement, so our members can continue to contribute to the prosperity of the company

“The strike is solid and has been well-supported by the Tyne and Wear community.”

The company makes laminated and toughened glass for bus windows and windscreens, as well as bulletproof items.

Message of support can be sent via Fazia Hussain Brown, Unite Regional Officer at fazia.hussainbrown@unitetheunion.org

This entry was posted in Solidarity, Unite The Union, Workers Uniting. Bookmark the permalink.