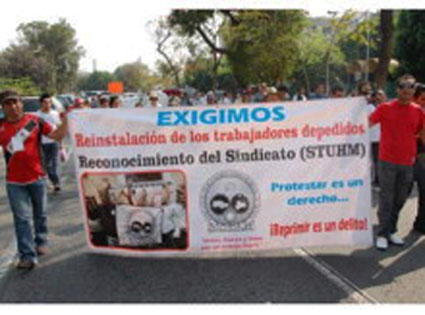 In early September, Honda workers in Mexico obtained legal recognition to register STUHM (Sindicato de Trabajadores Unidos de la Honda de Mexico) as their union. The company opposes the organization and prefers the sweetheart union that has blocked independent unions at the Honda site in Jalisco, Mexico for 26 years.

Honda workers now denounce the company’s continued repression and intimidation against the union and the workers wanting to join and independent union.

The Sindicato de Trabajadores Unidos de Honda de México (United Honda workers of Mexico) has fought for official union recognition since its establishment back in 2009.

Poor working conditions, harassment, low wages and lack of a real independent union to defend the 2200 workers were the main triggers of this struggle, which led to the dismissal of four young union leaders.

However on January 28th this year the District Labour Court ruled that the Secretary of Labour must grant registration to STUHM. The company challenged this ruling, but it was upheld in Court on August 18th. José Luis Solorio Alcalá, STUHM Secretary General, said the union registration had been systematically denied, including through trickery and illegal and corrupt practices. STUHM called the courts decision a historic victory for the working class of Jalisco, as it is the first time ever an independent union is recognized in this Mexican state.

Despite the recent Court decision on union registration, on September 6th Honda dismissed two more workers; José Lamas and Héver Gallardo, after they openly admitted to be STUHM members. Both José and Héver have worked for over 5 years in the Honda plant and were exercising their legitimate right to organise. Several other workers report that the local management is harassing and intimidating workers and offering them bribes and financial advantages if they sign letters renouncing their affiliation to STUHM.

STUHM continues to organise and defend workers rights, and has demanded a wage increase of 30 percent for all workers. Honda pays the lowest wages in the sector, on average one thousand pesos per week (US$ 72) for skilled workers, the “most miserable wages of the auto industry.”

Taken from a report published by the International Metalworkers Federation.