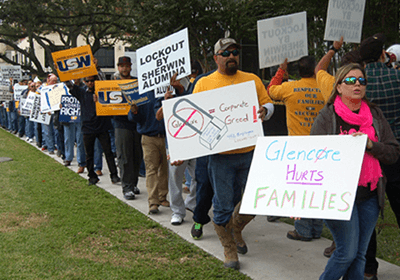 On October 11th, Sherwin Alumina locked out 450 hard-working United Steelworkers Local 235A members at their plant in Gregory, Texas. The lockout came after 235A members overwhelmingly rejected the company’s demands for major cuts in pension and health care benefits for members and retirees, as well as reductions in overtime pay.

Sherwin is owned by Glencore, a hugely profitable Swiss commodities giant that is the 10th largest corporation in the world, with net income of $4.6 billion in 2013. With alumina prices on the rise and production costs declining, there is simply no reason for this greedy company to demand cuts from the working families and retirees of south Texas.

Read more about the dispute by clicking here.