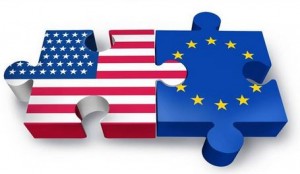 Unions in the UK and the EU have been campaigning against TTIP, the free trade deal between the EU and the USA (and the deal with Canada known as CETA) since significant details of the deals came to light earlier this year.

The main focus by European unions, including the ETUC has been on the threat of the Investor State Dispute clauses which would allow companies to sue sovereign governments should they feel their interests (and profits) are being detrimentally affected. And of course the threat to the NHS has been paramount in the UK.

Unions in the United States are now gearing up to oppose TTIP (and other trade deals), starting with ‘fast track’, the US system used to push through trade agreements on a ‘take it or leave it’ basis – with no line by line scrutiny by elected politicians.

The US Congress has regularly created new trade authority mechanisms as international trade has developed. Fast track first went into effect in modern times under Richard Nixon in the 1970s. Fast track authority was last granted during the George W. Bush administration, but that law expired on June 30th, 2007.

President Obama wants to ‘fast track’ TTIP and other trade deals currently under negotiation, but unions and some key Democrats oppose ‘fast track’ given the effect previous trade deals have had on US jobs – notably in manufacturing.

Under the NAFTA deal which opened up free trade in North America, which was signed off by Bill Clinton, around 700,000 manufacturing jobs were lost in the USA and over 60,000 industrial businesses were closed as work and jobs flooded into cheap labour zones in Mexico and the southern states.

Unions such as Unite and its partner union in the global union Workers Uniting, the United Steelworkers, are campaigning to put the brakes on TTIP and CETA, citing the fact that despite rhetoric from US, Canadian and EU politicians on job creation there is no proof that the massive number of new jobs predicted will be created; that the NHS or parts of it would be under threat of sell offs to US and Canadian multi-nationals; that the ISDS clauses could mean that US and Canadian companies could sue a Government if they felt their actions were detrimental to their interests such as nationalising industries and utilities, raising minimum wages or improving employment rights and that strong European employment rights such in Germany, France or Scandinavia would be undermined and workers would face a ‘race to the bottom’. 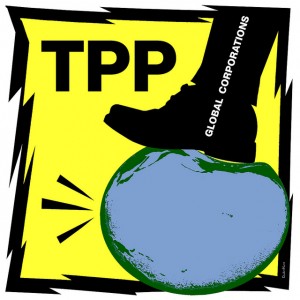 Commencing with a major advertising campaign which ran on the entirety of the Capitol South Metro station in Washington DC they highlighted the dramatic impact trade deals such as TTIP hold for working people.

The AFL-CIO said that ‘Fast Tracking’ trade agreements sets the USA on a path to concluding any trade deal that would take policy making out of elected politicians and turn it over to trade arbitrators who favour corporate interests over the public interest.

Richard Trumka, President of the AFL-CIO said: “Fast Track is a misguided and undemocratic policy that advances the corporate trade agenda and bad deals like NAFTA, CAFTA, and the Korea FTA. Congress must end the secrecy and create a new process to develop and implement trade, investment and economic policies that will promote good jobs, rising wages, a clean environment and a fair economy for us all.  America’s workers simply can’t afford more Fast Track”.

Lee Saunders, President of the American Federation of State, County & Municipal Employees said: “Trade agreements should not be designed to limit the ability of governments to implement and enforce laws that regulate business and protect our food, our environment, worker safety and the public’s health”.

Saunders highlighted TTP: “TTP would allow global corporations to challenge U.S. laws through secret, unaccountable and undemocratic, international trade tribunals that do not have to adhere to U.S. law or even abide by the U.S. Constitution when making decisions that impact U.S. citizens or companies. Fast Track would set the U.S. on a path to concluding a trade deal that would take policy-making out of the hands of anyone who has to answer to the voters, and turn it over to trade arbitrators who favour corporate interests over the public interest.”