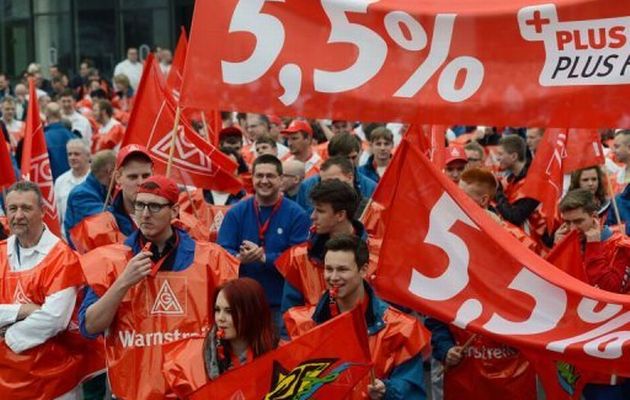 Germany’s giant IG Metall union has agreed to a staged wage deal in Bavaria which will see wages in the metalworking and electrical engineering industries rise 5.6% over the next 20 months.

The agreement in the southern German state was secured earlier today (May 15th) and follows weeks of tough negotiations and strikes. It is expected to serve as the pilot deal for all other German regions and will most likely apply to all of the 3.7 million workers in the engineering and metals sector.

IG Metall had demanded a 5.5% wage increase over a one-year period, will expire at the end of 2014.

It will leave workers better off, even after stripping out inflation that the European Commission projects at 1.8% this year and 1.6% next year.

The agreement in Bavaria also corroborates a trend of rising real wages in Germany and underpins expectations that private consumption will drive economic growth this year.

By comparison, euro-zone wages have been lagging inflation, according to data from the European Union’s statistics agency Eurostat.

Germany’s metals workers were emboldened by a stronger economic outlook and solid wage gains in other sectors of the economy.

While countries in Southern Europe are struggling to bring down high unemployment, unemployment in Germany remains near record lows.

At 5.4% in March, Germany’s unemployment rate was well below the euro-zone rate of 12.1%, Eurostat data show.