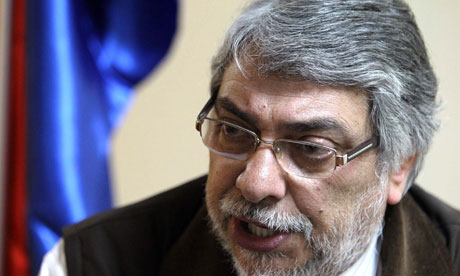 “I am delighted to be able to welcome you to Unite’s national offices for this important meeting today, hosted by ourselves, called by the Venezuela Solidarity Campaign and supported by the wide range of groups you can see behind me Unites, GMB, Tribune, Morning Star, Justice For Columbia, Cuba Solidarity, Liberation, Justice For Cleaners, Thomsons and others – a remarkable alliance built on very short notice.

Comrades we have seen many military coup’s in Latin American –  but the latest coup in Paraguay has been termed a ‘new kind of coup’ and is being roundly condemned.

We are here today to not only here about developments in Paraguay, but also discuss their wider implications for the region, where progressive governments in country after country – from the election of Hugo Chavez in Venezuela to the election of Morales, Lugo, Correa and many others since – have shown it is possible to put people first, and proved a beacon to trade unionists and progressives such ourselves.

This is also why such governments have progressive enemies.

And we have seen these reactionary domestic and international forces move into action in Paraguay in recent weeks just as they have in Ecuador, Venezuela, Nicaragua, Honduras and many other countries in recent years – sometimes successful, but also crucially sometimes not.

And that is why international solidarity is vital.

At our recent national policy conference Unite passed an emergency motion condemning what Lugo termed an “express coup d’etat” in Paraguay, expressing our solidarity with trade unionists and other progressive movements fighting for democracy and justice in Paraguay itself; and also our unity with the progressive movements and governments across Latin America – many of whom are represented on this platform here today – leading international pressure on the issue.

We also held a well attended photo call for delegates saying “no more coups” and have shared this widely, including by sending to Paraguay itself to show the international support there is, and would encourage other unions to look at how they can bring attention to the issue.

The reasons we did this were not only in solidarity with progressive changes but also in revulsion at reports we were receiving of human rights abuses from the new regime, echoing Paraguay’s tragic past, and which have been widely condemned by Paraguayan trade unions, left parties, social movements and others.

We have also been delighted to see the rapid and strong response from Brendan Barber at the TUC, endorsing the VSC initiated statement that was published in the Guardian and on Liberal Conspiracy, and writing to the Paraguayan Ambassador expressing their grave concerns about developments.

Indeed, the amazing response to the statement the VSC initiated within a matter of hours and days – from parliamentarians to cultural figures to academics to trade unions – reflected the widespread opposition there is to what has happened, and the clear support there is for progressive forces in the region that are represented on this panel today.

A copy is available here today and you can sign the petition along the same lines.

As we move forward we will continue to offer the solidarity needed, as it clearly is if you read the statement from Fernando Lugo you have on your chairs today, working with the VSC and others for democracy, social progress and workers’ rights.

No more coup’s – Viva the people of Paraguay!”