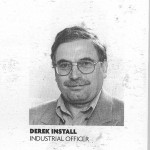 Former GPMU comrades will be sad to report the death of Derek Install former Industrial Officer of the GPMU who died recently.

I first met Derek in the mid 1970s when he had just been elected the SLADE & PW’s officer for the Midlands. (SLADE was the union which organised artists, designers, engravers etc.

He attended a meeting with the North West SLADE officer at the Stockport Express, where I was the FOC, over an inter union dispute over who could use Letraset – between NGA compositors and SLADE artists. (Its true, deadly serious and I still know the deal!).

When the GPMU was formed by a merger of SOGAT and NGA in 1982 Derek became an Industrial Officer.

Importantly Derek was also one of the first TUC Organizing Academy coaches, (along with Peter Ellis), responsible for the development of trainee organisers in the union and we worked together in the GPMU when I was DGS to develop the strategy both in the union and within the TUC.

Derek was also chair of the Labour Party’s National Constitutional Committee in the early 1990s.

He was a great trade unionist, who believed in the power of union organising workers into a union, especially young people.

The details of the funeral are as follows:

Time & date: 2.45pm on Monday 14th July and afterwards at the nearby Holiday Inn.

Please pass this email onto any friends or colleagues that knew Derek. Derek’s widow has requested that those hoping to attend, should please notify Peter Ellis as soon as possible, by email, on pjp.ellis@gmail.com, so that she can have an idea how many to cater for at the Holiday Inn.