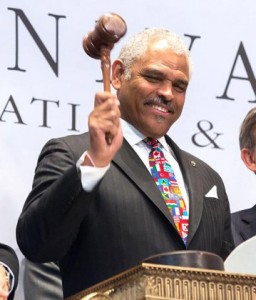 Confronted with repeated questions from shareholders, Donald was forced to address his role in an eight-month strike at the Toronto factory of manufacturing giant Crown Holdings.

Donald is a key member of the board of directors at Crown Holdings, one of the world’s largest producers of beer cans and other beverage and food containers. Crown Holdings provoked a strike at its Toronto factory last September by demanding huge concessions to employees’ wages, pensions and benefits. Crown has prolonged the strike for eight months with demands such as a two-tier job structure that would permanently relegate young workers to low-wage survival jobs.

In its last offer which was voted down almost unanimously, Crown offered few assurances that workers could return to their jobs after agreeing to end the strike.

“Rather than trying to come to a reasonable compromise, Crown decided to throw gasoline on the fire it started,” said Lawrence Hay of the United Steelworkers (USW), which represents the Toronto employees.

As a key director of Crown Holdings, Arnold Donald cannot deny his role and responsibility in the company’s attack on workers’ livelihoods, Carnival Corporation shareholders heard during today’s annual meeting.

Dozens of Toronto strikers demonstrated outside the Four Seasons Hotel while inside the hotel their labor dispute was discussed by Carnival executives and shareholders.

Shareholders questioned Donald’s role in the Crown Holdings strike, despite an attempt by Carnival Corporation Chairman Micky Arison to shut down the questions.

Shareholders noted that Donald’s role in the Canadian strike has led to a boycott of Carnival cruises that has been endorsed by seniors and labor groups representing 1.5 million members in Canada.

USW members accepted and urged Donald to use his influence to bring about a negotiated settlement of the labor dispute.

“Mr. Donald said he and other Crown Holdings directors are not fully aware of all the issues in the labor dispute at Crown’s Toronto operations, so we are ensuring he is well-informed,” said Hay.

“Mr. Donald has pledged to bring our concerns to the attention of Crown executives,” he said. “Crown’s executives and directors must accept their role in this unnecessary dispute and their responsibility to foster a fair settlement.”