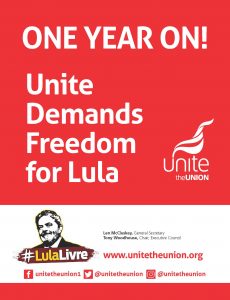 Last year, on April 7th, former President Luiz Inacio Lula da Silva was jailed for “indeterminate acts” of corruption while millions across Brazil were gearing up for the most important presidential election in a generation.

Just weeks before he was removed from the political process, the UN human rights committee officially requested that Lula be allowed to stand, have access to media and have access to members of the Workers Party while he was imprisoned.

This was ignored and, subsequently, the man polling second behind Lula won the 2018 election. You will know him as the military dictatorship-supporting, homophobic, racist and misogynistic far-right leader Jair Bolsonaro.

Lula’s arrest was not about tackling corruption, but about removing the most popular figure in Brazil from the presidential ballot.

For many, this travesty of justice was realised when Bolsonaro appointed Lula’s prosecuting and sentencing judge, Sergio Moro, as justice minister — despite Moro’s continued assertion that he wasn’t interested in politics while orchestrating Lula’s trial. But for those of us who follow Latin American politics, Lula’s political persecution was clear from the beginning.

Moro had shown his bias throughout proceedings, illegally wiretapping Lula’s legal team and family members and appearing at public events depicting Lula as guilty before the trial process was concluded. This would not have been allowed by the British, EU or even US judicial system.

Not only did Lula face political persecution to remove his political rights, he also faced a trial by media. Major news outlets continually depicted Lula in prisoner’s clothing and blamed Lula and the Workers Party — without evidence or logic — for a corruption scandal involving almost every major political party in the country.

The far-right used the perception that the Workers Party were corrupt as one of their main campaign focuses, painting Bolsonaro as an outsider who would be tough on political corruption.

Of course, Bolsonaro is now facing his own corruption allegations involving his family, money laundering and a paramilitary group involved in the tragic assassination of councilwoman Marielle Franco.

Lula’s jailing is not just a travesty of justice, it’s a travesty of democracy that has seen authoritarianism knocking at the doors of Brazil for the first time since the fall of the military dictatorship.

Lula was a former union leader from the north-east of Brazil who played a pivotal role in organising trade union action against the military dictatorship. He peacefully fought the far-right then, as he does now from his jail cell.

But it’s not just Lula’s freedom that is at stake. Lula’s two terms saw Brazil lift millions from poverty with a series of world-renowned social programmes and workers’ and trade union rights enshrined in law.

His policies for the younger generation have also had a huge effect, implementing a “nutritional revolution” that massively reduced child malnutrition as well increasing Brazil’s education budget and access to higher education for low-income Brazilians.

Bolsonaro’s first months have made it clear he is planning to roll back over a decade of social progress under Lula and the Workers Party. His call for Lula to “rot in jail” show that it is not only Lula’s achievements that under threat.

That is why millions in Brazil, and across the world, are calling for Lula to be freed and for his political persecution to end. Supported by international trade unions, and by unions here in the UK, there are demonstrations taking place in major cities across the globe on April 7  to mark one year since his jailing.

You can add you name to a public statement of support for Lula and join the millions calling for his freedom at https://brazilsolidarity.eaction.online/freeLula