And the Government wants to make easier for bosses to sack workers…. 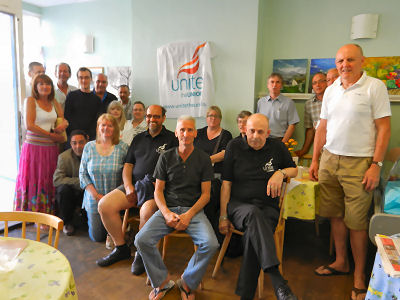 After publishing the Beecroft Report and arguing that employers need to be able to easily dismiss workers here is a salutory lesson on why workers need more, not less protection.

Unite members were employed at a small specialist printers GC Print Limited in Kent.  Mr. Philip Moore was the main shareholder of the company. In March 2009 Mr. Moore put GC Print into liquidation.

Just before putting GC Print into liquidation Mr. Moore purchased Thanet Press and he informed staff at both sites that he intended to merge the two factories by 2011.

In March 20o9 Unite members, as normal, reported to work at GC Print only to be told that the company had gone into liquidation. Mr Moore then proceeded to transfer the former GC Print work to Thanet Press.

On March 28th that year – again without any warning or prior consultation – Mr. Moore informed Thanet Press workers that liquidators had been appointed to wind the company up and members were to be dismissed with immediate effect.

Unite took Mr. Moore to an employment tribunal. The claims arising out of the closure of Thanet Press were the subject of a hearing in December 2011.  The union was awarded the maximum 90 day protective award in respect of the failure to consult on redundancies.  To date Unite members have received approximately £100,000 worth of compensation from the redundancy payments office.

Just the sort of thing to create growth then? This is the real world. The world where employers can sack people at will, close down companies, fail to consult the workforce – and ignore the law.

And the Government want to make it easier to sack people to create growth and new jobs!

Thanks to Unite Regional Officer Tim Elliot for sending in this item.