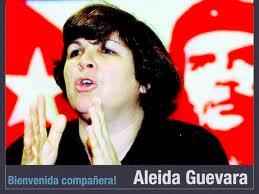 Aleida Guevara, daughter of revolutionary leader Ché Guevara will be speaking at Cuba Solidarity Campaign meetings in the UK in September, together with Luis Marron from the Cuban Friendship Institute, (ICAP). Aleida Guevara March is the eldest daughter of four children born to Ernesto “Che” Guevara and his second wife, Aleida March. She is a doctor of medicine, and has also worked as a physician in Angola, Ecuador, and Nicaragua. Guevara speaks in defence of Cuba, for peace, socialism, and Latin American solidarity. She is the author of the book ‘Chávez, Venezuela and the New Latin America’. Aleida will be joined by Luis Marron, a good friend of CSC, former Political Counsellor at the Cuban Embassy in London.

The tour dates are as follows:

Tuesday 18 September, 6-7.30pm
Vigil for the Miami Five, US Embassy, Grosvenor Square, London Candlelit vigil with speakers from the British and international labour movement to mark the 14th anniversary of the arrest of the Miami Five.