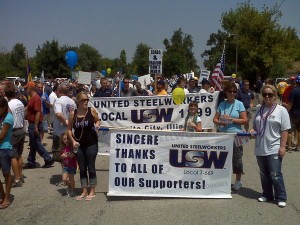 The United Steelworkers (USW) sounded the alarm over concerns to the community about observations and reports on plume leakages at the Honeywell uranium conversion facility that is involved in a five-month-old lock out.

USW pickets outside the Honeywell facility noticed a large plume from the hydrofluoric acid (HF) storage area. The plant’s mitigation towers, which spray water to knock down any escaping gas, were turned on and sirens sounded. The towers sprayed for approximately an hour and a half. The emergency siren was turned on, then immediately off, and then later on again. The plant already suffered a shut down following an explosion earlier this year.

USW Local 7-669 President Darrell Lillie said, “We have been warning everyone for months that there is the possibility of a fatality and major breach of public safety at this plant. The workers in the plant do not have the experience it takes to safely run this facility.”

Honeywell has been running the Metropolis, Illinois plant with scabs since locking out the unionised workforce of over 200 workers on June 28th.

The plant has been recently cited for violations by the U.S. Nuclear Regulatory Commission (NRC), and is under a separate investigation by the U.S. Environmental Protection Administration (EPA) concerning improper storage of potassium hydroxide.

“The community should be outraged at the way the facility is being operated and their safety at risk, and demand that someone take action before this becomes the present day Katrina,” Lillie said.

According to the USW Honeywell issued a statement that claimed the plume was a “small release” of hydrofluoric acid. However, the experienced union workers from the plant, who are on the picket lines, could do nothing but watch with skepticism that a so-called “small” release doesn’t require the mitigation towers to run for more than an hour.

Gary Lewis, a 14 year veteran of the plant was on the picket line when the event happened and said, “I heard the sirens and saw a large cloud of HF over the tank farm.” He added, “HF is nothing to play with, it can kill you.”

The storage tank that failed was full and holds approximately 150,000 pounds of hydrofluoric acid. Honeywell typically stores over one million pounds of HF on site. The company’s own risk management plan indicates that if 15 percent of the HF onsite is released, it could travel up to a 25 mile radius and endanger a population estimated to involve as many as 128,000 people.

USW Local 7-669 President Lillie said, “If Honeywell managers responsible for the facility continue to have ‘fender benders’ like the one we observed from Wednesday, it’s only a matter of time before there is a ‘head on collision.'”

“If Honeywell is going to continue to run the plant in this manner, we recommend they provide every home in the 25 mile radius calcium gluconate cream for possible hydrofluoric acid exposure. The community needs to be protected, and at this point, quite frankly, they are not.”

The NRC recently released an inspection report that cited Honeywell for several violations of their license. The report is available on the NRC website at www.nrc.gov.

More information is available on the USW Local 7-669’s website at usw7-669.com