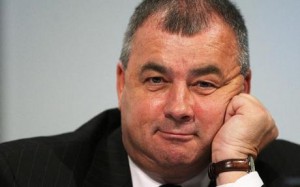 TUC's Brendan Barber says 2011 will be a 'horrible year'

In his New Year’s message TUC General Secretary Brendan Barber says that 2011 will prove to be a ‘horrible year’.

In a press statement issued by the TUC Brendan says that: ‘Unemployment will increase as thousands of public servants get made redundant. Just as many – if not more – private sector jobs will go, both as a direct result of the cuts and through the knock-on effects of reduced economic activity.

‘Benefit cuts will kick in, and thousands of some of the poorest and most vulnerable people will see real cuts in their living standards.

‘It’s hard to pick out the unkindest cut of all, but a top contender must be the ten per cent cut in housing benefit that kicks in after someone has been unemployed for more than a year.

‘With long term unemployment already rising sharply, the government cannot get away with labelling the long-term unemployed as scroungers when there are more than five jobless chasing every vacancy.

‘Cuts in services will start to make a real impact. With the government front-loading cuts in local government and services like the police in the hope that people will forget them before the next election, there will be few people who do not notice their impact.

‘High profile services such as libraries will cause widespread anger, but there will also be deep cuts to much less visible services that directly support the vulnerable. And for all the talk of the Big Society and charities stepping into the gap, the brutal truth is that voluntary organisations will face some of the deepest cuts of all.

‘It could well be a horrible year for the government too. Already it has faced anger in constituencies where much-needed new schools were cancelled, and protests from students and school-children at cuts in EMAs and higher tuition fees. But 2011 will see many more people directly affected, and anger is likely to grow.

‘What is becoming clear to people is just how unfair the coalition’s policies are. Those who did least to cause the crash are being made to take the nastiest medicine with the worst side-effects.

‘Spending cuts inevitably hit those on low and middle incomes, while taxes – such as a Robin Hood Tax and real efforts to deal with tax avoidance – can be targeted on those who can afford to pay.

‘Yet even the modest tax contribution chosen by the coalition is VAT – the unfairest tax of all.

‘The British people are never that interested in politics, but we do have a deep sense of fairness that goes across traditional party lines. As none of these policies were put to voters before the election, this could well be the year that the country starts to say ‘no’ to government in a way that they have not since middle Britain made a previous Conservative government abolish the poll tax. 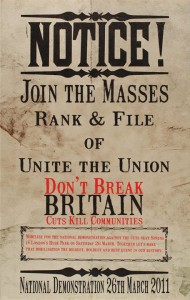 ‘The TUC’s March for the Alternative on 26 March promises to be one of the biggest events that we have ever organised, but local campaigns and protests that do not hit the national headlines could well make just as much an impact in those constituencies where there are coalition MPs with small majorities.

‘And as an abstract national debate about the deficit is overshadowed by personal experiences of job cuts and service reductions, there will be much more interest in economic alternatives.

‘The decision to cut the deficit in four years and to take £4 out of services for every £1 in tax was a political choice, not an economic necessity. Stimulating growth and progressive tax are safer and fairer ways to reduce the deficit.

‘This is going to be a year when many people suffer, but it just could be the year when the campaign for change really gets going.’