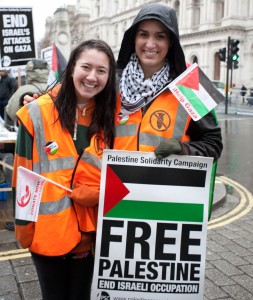 On Saturday 24th November, 10-15,000 protestors braved the rain to march from Downing Street to the Israeli Embassy carrying the message to the British and Israeli Governments that Israel’s impunity can not be allowed to continue and the siege must end now.

At the beginning of the march, more than a hundred and sixty balloons were released to symbolise the Palestinian lives lost during Israel’s attacks over the past week. After marching through central London’s streets thousands of Palestinian supporters heard speeches from PSC patrons Ahdaf Soueif, Baroness Jenny Tonge, Jeremy Corbyn MP, Victoria Brittain, Ken Loach (message of support) and from PSC’s Vice Chair Kamel Hawwash.

Ahdaf Soueif told the crowd ‘Israel and the world are going on divergent paths. The Arab world in particular is changing. Last week 500 young Egyptian activists went into Gaza. No time in the last 40 years would this have been possible. The will of the Egyptian people – especially our young people – is something that will not be stopped.’

Ken Loach’s message said that ‘When Government’s fail then civil society must act. We must support boycott, disinvestment and sanctions.’

The crowd were reminded by Victoria Brittain that ‘The assassination of Ahmed Al Jabari was just one in a long long list of political assasinations that have been aimed at preventing Palestinians from having a leadership that can lead them to freedom. The four founding fathers of the PLO were all assassinated.’

Seamus Milne warned that ‘There will be another Israeli attack on Gaza and it will be supported by the British government. We’ve been told Israel’s relentless bombardment of Gaza, killing more than 160 people, is Israel’s right to self-defence – that the rockets are the root cause of the conflict. But this is to turn reality on its head on an Orwellian scale. Gaza, the West Bank and East Jerusalem have been occupied for over 45 years. Gaza remains occupied by land, by sea and by air under the blockade. Israel has an obligation to withdraw, but the Western powers have backed them to the hilt.’

The Palestinian Ambassador Manuel Hassassian received huge applause when he set out that ‘State terrorism being inflicted on our people in Gaza and the West Bank. Israel is still using its Apache helicopters and F16s against innocent children – and yet the Western states lecture us about democracy. Shame on the UK government for supporting such a state. They tolerate our people being kept under occupation for over 40 years, whilst those who order these war crimes are welcomed and even protected from arrest when they come to the United Kingdom. We’re not going to leave our land – we shall overcome.’

PSC’s Director said that ‘making sure Israeli war criminals are brought to justice will be key to our campaigns.’