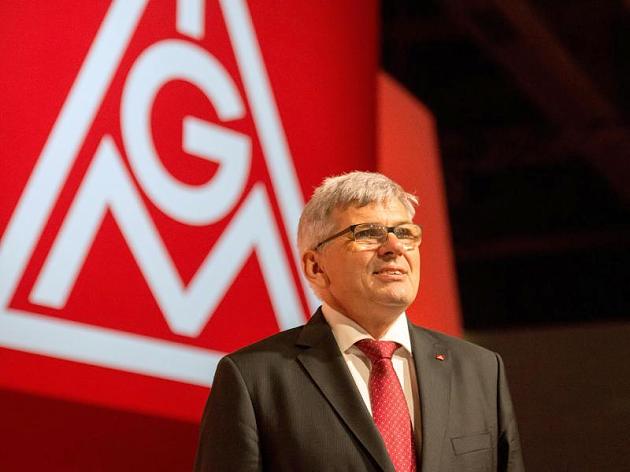 The 2.5 million member union has elected Joerg Hofmann, aged 59, dubbed ‘a tough wage negotiator and trained economist’ by the German media as its new leader (First President) and a woman Christiane Benner as his deputy (Second President).

Hofmann, aged 59, takes over from Detlef Wetzel, who has retired aged 62. Benner aged 47, becomes the most powerful woman in the German trade union movement.

Under Detlef Wetzel the union restored its standing in Germany and reversed membership decline, helped by a strategic organising campaign to recruit workers in new industries, women and young people.

In addition the international outlook of the union has been extended with the union now opening offices in Brussels to influence the EU, and in Hungary and in the southern USA – the latter two to help unions organise in non union car plants owned by German companies, using the German style ‘works council’ system.

Unlike other IG Metall leaders, Hofmann did not come up through the ranks of engineering workers but came through research and then became a full-time union official.

He has set out a series of policies designed to fight attempts by employers using out-sourcing, temporary and agency work to evade collective bargaining agreements and to undermine co-determination, the cornerstone of the successful German manufacturing economy.

The other key issue debated is the digitization of industry which will be a major issue for all manufacturing unions. IG Metall has set out a strategy (backed by a significant resources) to focus on the prospects for traditional manufacturing workers whose work is being taken over by robots and more automation notably in semi and unskilled areas.

IG Metall is campaigning for workers to be trained in higher IT functions to help save them from becoming redundant.

Benner’s, election was helped by the fact that she is currently responsible for IT and electronics workers in the union and she came through the ranks as a union youth leader.

She has focussed on ‘click-workers’, including contractors who work remotely, often from home, doing project work such as processing data, paid on a piece-rate basis. “IG Metall needs to reach out to such workers”, she says and warned delegates that “IG Metall will transform itself. We know exactly what’s going on. There will be upheaval.”

Other key issues at the Congress included the VW scandal and its effects on the German automotive sector with speakers making in clear that the union will not accept VW workers paying the price for what was described as ‘criminality’ by managers.

The refugee crisis also dominated debates with delegates and the leadership supporting the need to help refugees find decent work and education to ensure they are not used as cheap labour to undermine German workers standards. Delegates, in a show of solidaritry wore T shirts with “Refugees Welcome” emblazoned on the front.

Chancellor Angela Merkel in her address to the union said the influx of asylum seekers into Germany was part of the fallout from globalisation, which, she noted, had served Germany well in terms of exports and jobs.

Merkel said: “Your experience of globalisation has, until now, has basically been – our economy goes into other countries, builds factories, sells products and the results are positive for German employment and business. And now we’re witnessing an inverse movement: globalisation is coming to us.”

Merkel said that the refugee tide had made “that which we thought was very far away, – the war in Syria or the bloody conflict between rival factions in Libya, is concrete for us in the form of refugees.”