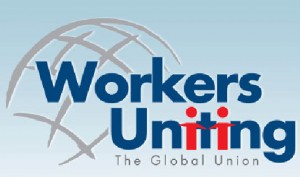 Workers Uniting the global union created in 2008 by Unite in the UK and Ireland and the United Steelworkers in the USA and Canada say they will oppose the Trans-Atlantic Trade and Investment Partnership (TTIP) deal if Labour standards in the deal are not strengthened and other concerns about the deal are not addressed.

The three million member trans-Atlantic union at its board meeting in London on March 24th issued a call to European Union and U.S. trade negotiators to strengthen social and labour protections in the proposed Trans-Atlantic Trade and Investment Partnership (TTIP).

“We view TTIP as a threat to the rights of workers in Europe,” said Len McCluskey, General Secretary of Unite the Union in the UK and Ireland. “We can’t afford to import America’s low labour rights standards.”

“American and European workers deserve a better deal,” said Leo W. Gerard, International President of the United Steelworkers (USW), which represents workers in the United States, Canada and the Caribbean. “Our governments’ narrow focus on greater protections for companies must be transformed to include expanded rights and protections for workers.”

In its statement, Workers Uniting calls for the TTIP to include a tax on financial transactions to support social programmes – a measure already endorsed by 11 European countries.

The statement also demands that the European Works Council directive, chemical safety standards, and other European social legislation be expanded to include American workers.

The Workers Uniting statement also demands that existing procurement regimes be left intact and that public services be excluded from TTIP.

The statement rejects the proposed Investor-to-State Dispute Settlement, noting that Germany and France oppose this provision as well.

Workers Uniting joins a chorus of opposition from trade unions, including the powerful German metalworkers union, IG Metall to the current TTIP negotiations.

Worker rights and social protections must be placed at the center of any agreement.

Click on the links or the Workers Uniting logo to read the full  statement.