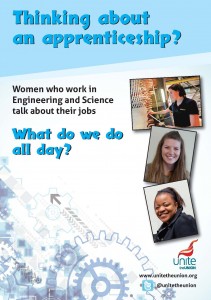 This week the UKs biggest trade union, Unite, is launching its guide to encourage more young women to take up skilled apprenticeships in engineering and science at a series of events including the Voices Of Apprentices conference at Solihull; at the TUC Women’s Conference in London and at Unite’s head office in Central London.

So why do Unite, with 500,000 members working in manufacturing, think we needed to do this?

Well, as things stand only a small amount of engineers in this country are women, a paltry 7%. That’s the lowest in the entire European Union, a galling statistic in 2015 and one manufacturers need to be concerned about.

Three times the size of our retail sector, whether it is transport, factories, hospitals, offices, white goods or communications – engineering and science skills are essential to our everyday lives.

The plain fact is the British economy needs another 87,000 new skilled apprentices every single year for the next decade in order to make sure we are able to meet the global challenges of the future – energy, climate change, food and water supplies and an ageing population.

Unite believes we need to get more women engineers and scientists into the workplace. Currently only 3% of engineering apprentices are female so there is a long road to travel.

For far too long women have been held back by an unconscious bias from teachers, parents and employers which has reinforced outdated gender stereo-typing when it comes to engineering and science apprenticeships.

The key point of the guide is to get young women talking to others just like them about what the reality of working in engineering and science, and that includes going into schools and colleges and taking part in events such as Big Bang where Unite will be an exhibitor and talking about STEM subjects and the skills needs for the future.

There is a major difference here between these conversations and the one-dimensional aspect of some official company adverts.

This is part of an ongoing campaign by Unite to bust myths about engineering being unsafe, dirty work which women aren’t strong enough to do. Such old-fashioned notions belong firmly in the past. Or that science based apprenticeships are not for women.

We are talking about vast reserves of untapped potential among the nation’s young women and the best people to inspire the women engineers and scientists of the future are those doing this kind of work today.

Take Natalie Murray, a maintenance apprentice at the BMW Mini plant in Oxford. “My male counterparts treat me exactly the same as the male apprentices” she told me. “We should try to step away from the ‘stereo-type’ given to women so we don’t assume they want to do a clean, office type role, but a practical hands-on role.”

Amy Ensor, an engineering apprentice at Brush in Loughborough explained that it’s a “standing joke” that her dad started her career off. “I was one of those females who believed engineering was solely for males…my dad had to ring Brush to confirm they would even consider taking on a female. “One of my main concerns is that there are plenty of other females out there that have the ability and skill required to perform such engineering tasks.”

Emma Brown an apprentice at Unilever told us: “An apprenticeship is certainly not an easy option, but I really enjoyed it. After four years of hard work I now have a first class degree in Chemistry and a permanent position at Unilever.”

Such testimonies show that apprenticeships are a brilliant opportunity with a real, decent and secure job at the end of it.

On offer is qualification gained via a high quality work-based programme with the opportunity to earn a real wage, work in decent conditions and gain practical and portable skills.

In addition Unite will always work hard with employers and the sector skills councils COGENT and SEMTA (where the union is represented on the main boards) to help ensure that apprenticeships being offered are top quality, Gold Standard and meaningful – never bogus, low quality apprenticeships.

I’d say to all women interested in taking an apprenticeship in engineering and science – don’t be put off by outdated sexism. Britain doesn’t need it, but Britain certainly needs you.

You can get a free printed copy of the guide by emailing bridget.clemson@unitetheunion.org