What do bond markets think of ‘austerity’? 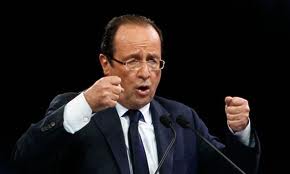 The victory of Francois Hollande in the French Presidential contest provides a further insight into the operation of the bond markets. It is frequently argued that there can be no retreat from ‘austerity’, which in reality is simply the transfer of incomes from labour and the poor to capital and the rich, because the bond markets will recoil and long-term interest rates will soar. This is important as significantly higher long-term interest rates could, unchecked, choke off recovery.

As the new French President has made some gestures in the direction away from ‘austerity’, then it should be expected that at least French long-term interest rates would rise as a result. But French government bond yields have fallen since the Socialist victory, by 18bps (basis points, equivalent to one hundredth of a percentage point, or 0.18 per cent). Ten-year French government bond yields declined to 2.79 per cent, lower than before the election.

It could be argued that financial markets do not believe Hollande will carry through a genuine alternative to cuts in wages and public spending programmes. He was certainly cautious enough in his pronouncements to support that idea. Even so, he is not Sarkozy who directly promised further cuts and some uncertainly remains among financial market commentators about whether, or how quickly, the new President will change course. At the very least his commitment to verbal support for austerity is less than his predecessor. Clearly, the assertion that the bond markets will punish any slight step away from ‘austerity’ is incorrect.

In fact, the German powerhouse has increased economic divergence within the EU because it has not adopted itself the prescription it has insisted on for others. The latest departure from orthodoxy is the call for higher German wages from Finance Minister Schauble.

Yet German yields also fell to 1.55 per cent and remain the lowest in the Euro Area.

Role of bond markets
It is important to distinguish between the views expressed nightly on our TV screens by ‘experts’ from the financial markets and the actions of the main bond investors, pension, insurance, sovereign wealth funds and others. The most famous ‘expert’ in the world is Bill Gross, Chief Investment Officer for one of the world’s largest bond funds PIMCO. Previously, he very publicly announced he was selling all US government debt holdings because of quantitative easing in the US and Obama’s fiscal stimulus. He was later forced to apologise to investors and buy back US government bonds he had sold, having missed a huge rally in bond prices (which leads to lower yields).

It is necessary to explain briefly the role of bond investors. The creation of a national debt is one of the primary ways in which financial capital establishes its dominance over the rest of the economy. Debt interest is supplied by diverting income from the productive sectors of the economy. Since all value is created by labour, labour is also the ultimate source of all debt interest. This entails a transfer of income from labour to capital. In fact, given the regressive tax changes that have taken place in many industrialised countries including Britain, labour and the poor are also the direct source of that transfer of incomes, as they supply the bulk of all tax revenues (income tax, VAT, etc.).

For any sector of capital the main motivation, its raison d’être is the maximisation of capital. Ordinarily this means the expansion of capital at the maximum sustainable rate. But in a crisis where losses are anticipated, maximisation can mean simply preservation. Industrial capital is currently being hoarded via the investment strike. It is being preserved. For finance capital, specifically the portion that is allocated to government bonds, the main important indicators are usually, growth, inflation, government deficit levels and so on. All of these are gauged in order to optimise the sustainable expansion of capital through interest payments.

But in a crisis the focus will switch to the preservation of capital. This is why Germany, with its large external surpluses and falling budget deficits remains the strongest borrower in the EU even while increasing investment and wages. Investors believe they are certain to get their money back. In an extreme crisis, these investors may even been willing to accept the prospect of small losses in order to preserve the bulk of their capital, and interest rates have occasionally been negative in countries like Switzerland and Japan .

The very modest changes in French government bond yields are evidence of this dominant factor. The possibility of even a very modest adjustment in the drive towards ‘austerity’ has increased the likelihood that French bond investors will be repaid, that there will be no default on French government debt. The productive sectors of the economy, which finance the debt interest, may be in a slightly stronger position to do so if they are faced with slightly fewer cuts.

Varied Responses
Not all EU government bond markets rose in the wake of the French Presidential poll. Those countries where bond prices fell, so pushing up interest rates, include Greece (with its own inconclusive election), but also Ireland, Italy, Portugal and Spain. They have all adopted a programme of public spending and other cuts, with different degrees of severity.

Their policies are the opposite of the verbal gestures Hollande has made in the direction of stimulating growth. The most extreme case is Greece where ten-year yields are over 23 per cent. But in a country like Ireland, which is routinely held up as the example of successful ‘austerity’, yields on some debt have risen by 50bps in the last week alone.

In the current crisis, bond market investors are obliged to consider whether they will preserve their capital, not just how they may be able to increase it. They have already experienced final losses of a partial default in Greece. In many of the crisis-hit countries current bond prices are considerably below where they were issued.

They have been faced with a new choice of at least a verbal commitment to growth from France, and persistent ‘austerity’ in many other countries. The response has been to buy French government bonds and sell those where the governments, via the ‘Troika’ in some cases, are committed to further cuts. This is because the judgement is that the investors’ capital is more likely to be preserved via growth than through austerity.

The repeated assertion that pro-growth policies cannot be adopted because of the negative reaction of the bond markets is a false one.

First published by the Socialist Economic Bulletin on 16th May 2012 and re-published with permission of the author.