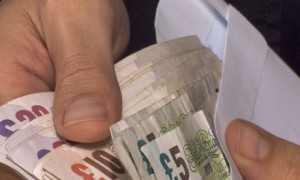 At 2.5%, union-negotiated private sector pay rises in the year to July had a lower mid-point (median) value than they did in the same period a year earlier, according to the Labour Research Department (LRD). The equivalent figure then was 2.9%.

That drop of 0.4 percentage points confirms that there is little sign of a recovery in pay settlements despite the 0.7% April-June growth in economic output (GDP) and the 0.8% July-September growth estimate.

The majority of public sector settlements are still held back at 0%-1%. So, together with these private sector results, it means the overall pay rise mid-point in 2012-13 stayed stuck at 2.5%.

With average earnings growing at an even slower rate, according to the Office for National Statistics, it just confirms the lack of a recovery in pay so far.

There was a measure of progress in that there were fewer private sector pay freezes (5% this year compared with 10% in last year’s LRD Pay Survey) but any at all is “abnormal” and shows how far we still have to go.

Figures from the LRD Pay Survey were published in Workplace Report, LRD’s magazine for negotiators.

It confirms that living standards are still being squeezed as Retail Prices Index (RPI) inflation is running at over three per cent and has been as high as 3.3%.

One bright spark was a significant level of bargaining on terms and conditions other than basic pay: “Many employers were willing to negotiate bonuses, allowances, holidays, maternity leave or the Living Wage, and may be keen to keep their workers ‘on side’ in expectation of better times ahead”.