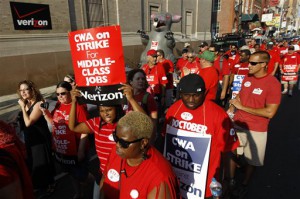 This maybe a a little bit behind – so this is to catch up with events in the USA where 45,000 members of  the Communications Workers of America and the International Brotherhood of Electrical Workers from New England to Virginia went on strike on 7th August.

The communications giant Verizon with breath taking greed is demanding $1 billion’s worth of concessions from its workers – amounting to a salary and benefits cut of $20,000 per worker, and the elimination of pensions for new staff.

The CWA said that the company was also demanding retirees pay $6,000 annually for their medical benefits after they made promises that it would be free.

Verizon has made $19 billion profit in the past four years.

Verizon recently reported a 2.8 per cent rise in revenue to $27.5 billion (£16.8bn) in the second quarter which the company says is from its wireless division.

It added 1.26 million subscribers between April and June.

But the company’s claim does not stand up to scrutiny. Wireline maintenance is the backbone of the wireless service. Mobile phone carriers including Verizon  use the copper infrastructure built and maintained by union workers. That same network also supports landlines for businesses, which still rely on them, and alarm systems for offices and homes.

“AT&T, MetroPCS, they lease it from us,” says Mike Nixon, who has worked as a field technician with the company for 23 years. “Verizon profits no matter what.”

Verizon started a new venture, Verizon Wireless, when it went into the mobile phone business – in order to avoid the new workforce from automatically being part of the company bargaining unit.

A 2007 report by American Rights at Work said Verizon has “maintained non-union divisions by interfering with its employees’ freedom of association” even though the company “could choose a high-road model of investing in its employees and still compete in a rapidly changing industry.”

CWA pickets have been protesting across the USA especially outside Verizon Wireless stores, where low-wage retail workers have been joining the union. 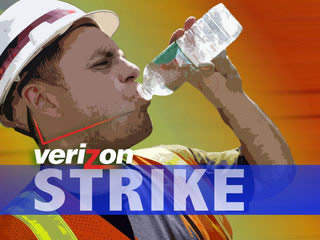 “People are angry,” says Kate Bronfenbrenner, director of labour education research at Cornell University’s school for industrial and labour relations. In New York, the CWA has been successful in strikes against the phone company in the past. In 1989, it fought off cuts to healthcare benefits, and later secured work breaks for members, Bronfenbrenner says.

More updates on the Verizon strike will appear here. In the meantime visit the CWA website for more information.