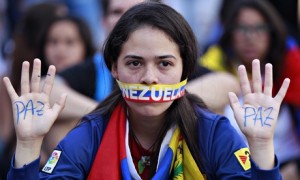 The following is a statement from the VSC of which I am Vice Chair. Please tweet this, add to your Facebook sites.

Make no mistake this is an attempt to overthrow a democratically elected Government by a US backed right wing coup and a return to the days when Latin American countries were subject to military juntas, right wing coups, and fascist dictatorships such as Pinochet’s. It must not be allowed to happen again. The social progress made in Venezuela, Bolivia, Cuba, Ecuador and other will be rolled back by violent means.

“We deplore the wave of violence from minority and extremist sections of Venezuela’s opposition, that left 3 dead, 60 injured and saw physical assaults on government institutions including shots and Molotov cocktails attacks on the state TV channel and a state governor’s residency.

We note that this followed a recently launched campaign by Venezuela’s extreme right for the La Salida (The Ousting) of the government of President Maduro before his constitutional mandate ends in 2019.

La Salida is led by extremists politicians Leopoldo Lopez and María Corina Machado who were both implicated in the 2002 coup in Venezuela, with Lopez claiming that it will only “be over when we manage to remove those who govern us,” an irresponsible attitude that can only lead to inflame the situation further.

We note that this is not the first time that the sections of the opposition have sought to oust the elected government by unconstitutional means having lost at the ballot box. Most infamously there was the military coup in 2002 but also includes an oil lock-out designed to wreck the economy, economic sabotage and refusal to recognise electoral results declared free and fair.

We further note that Venezuela’s President Nicolas Maduro has expelled three US consular officials from the country, accusing them of meeting people involved in anti-government protests.

We believe that whilst people in Venezuela have the right to protest – and that the Venezuelan constitution guarantee these and other democratic rights – this must be done peacefully.  There is no justification for violent opposition to the elected government in Venezuela.

We support the Government’s call for peace and dialogue to resolve differences rather than violence and welcomes the huge rally it organized for Peace and Life this weekend. We also oppose any external intervention in Venezuela.

We strongly support the statement of the United Nation’s of South America (UNASUR) that violence to seek to overthrow the elected, constitutional government is unacceptable. We join them in both condemning the wave of violence unleashed as a consequence of the proclaimed objective of “the ousting” of the elected government and in supporting calls for dialogue and peace”.

* To add your name to this statement, or to request further information, please email info@venezuelasolidarity.co.uk