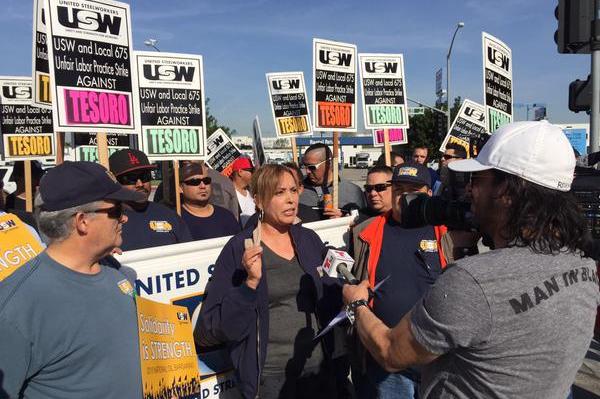 The United Steelworkers (USW) has announced that it has reached a ‘tentative agreement’ on a new four-year contract with Shell Oil as a pattern agreement for the rest of the industry. 7000 oil workers have been on strike across the USA for the past two months.

The agreement accomplishes the major goals as directed by the USW’s Oil Conference in October 2014, and has been approved by union’s lead negotiators and National Oil Bargaining Policy (NOBP) Committee.

“We salute the solidarity exhibited by our membership,” said USW International President Leo W. Gerard. “There was no way we would have won vast improvements in safety and staffing without it.”

Safety issues were central to the negotiations, and the proposed agreement calls for the immediate review of staffing and workload assessments, with USW safety personnel involved at every facility. Daily maintenance and repair work in the plants was another critical issue that, too, was addressed.

“Preserving “retrogression” clauses in our agreements was also an objective established by our policy conference and we accomplished that, too,” said USW International Vice President Gary Beevers, who oversees the union’s oil sector. “There was no way we could turn our backs to the accomplishments of prior contract negotiations.”

The next step in the bargaining process is for the company to put the terms of the settlement agreement on all of the Shell and Motiva bargaining tables. Our expectation is that other employers will offer the same terms at their local bargaining tables.

The local unions will then review the employers’ proposals with Vice President Beevers. Approved settlement agreements are then submitted to the local membership for explanation and ratification votes.