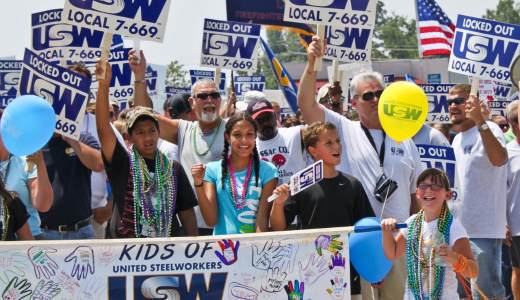 Congratulations to the USW members at Local 7-669 in Metropolis who stayed solid during a 13 month lock out by Honeywell. You are an inspiration to us all. Honeywell failed to bust your union – global solidarity worked. Here is the officials statement from the USW:

“The United Steelworkers (USW) announced ratification of a new three-year agreement, ending a 13-month lockout by Honeywell International at the uranium processing plant in Metropolis, Ill., that is the largest conversion plant in the world to produce nuclear fuel for commercial reactors.

After a day-long vote yesterday at the union hall, USW Local 7-669 President Darrell Lillie said the membership approved the agreement, including a separate back to work provision. He declared: “We fought one-day longer on all the core issues and won them to our satisfaction. All of us who were locked out by Honeywell in June of last year who want to go back to work are doing so with union pride, a union contract and union solidarity.”

USW International President Leo W. Gerard led a national and global campaign to support the locked out workers. He flagged the dispute in meetings at the White House, with congressional leaders and federal regulatory agencies on Honeywell operating a critical nuclear energy facility with inexperienced scabs.

He said: “This is a victory earned in struggle by the Metropolis workers, their families and the community. Local 7-669 leaders and the members stood on the picket line as heroes who showed a commitment to fight an American multinational on principles that are rock solid about workplace safety, family health care, pensions, and job fairness.”

Jim Robinson, director for USW District 7 representing Illinois and Indiana workers, mobilized rallies, raised picket line contributions, and filled buses with the locked out Metropolis members. The locked out workers traveled twice to Honeywell global headquarters in Morristown, NJ, and met with legislators at state capitols. A USW delegation later travelled Europe to join leaders of Honeywell’s German and European Works Councils in Hamburg and Brussels at unity actions that kept the company coming back to the bargaining table.

Robinson said, “We formed a global labor coalition of organized Honeywell workers in the U.S. and Europe led by Alabama Steelworkers’ Director Dan Flippo. The company got the message and finally got serious about putting together a deal we could take to the locked out members.”

The new labor agreement retains all the major provisions that Honeywell sought to eliminate on existing seniority, the pension plan, health care for current hourly workers to include retirees, plus overtime pay practices. The benefit and work practice provisions were the most important to the locked out members, but the new contract will provide one percent wage increases in the second year and a two percent raise in the final year. Newly-hired workers will be placed in a different pension plan.

Some of the original 230 locked out workers in the 13-month struggle moved on to other jobs, quit or retired, creating vacancies for new hires at the Metropolis plant. Under terms of the back to work agreement, scabs or temporary workers will leave and the USW-represented workers return under a transition procedure required by the U.S. National Regulatory Commission (NRC) for safety retraining and recertification.

A schedule is being phased in among each of three returning USW groups of hourly workers. The first being the largest with 150 USW members is reporting Aug. 15 to the Paducah Community College campus for two weeks of certification training.

A big stick was wielded by European labour federations representing 16 million workers that included 30,000 workers employed at Honeywell units this past May, when leaders publicly stated: “We call on you to take all measures to ensure that this lockout be ended immediately, with all workers welcomed back to their plant without reprisals, and with full agreement of the United Steelworkers.”

Unite, the UK union that has formed the first trans-Atlantic global union with the USW called Workers Uniting, was also actively engaged in the European campaign to support the locked out Metropolis Honeywell workers.

For more on the campaign in support of the locked out Honeywell Metropolis union members: www.usw.org, and www.usw7-669.com”