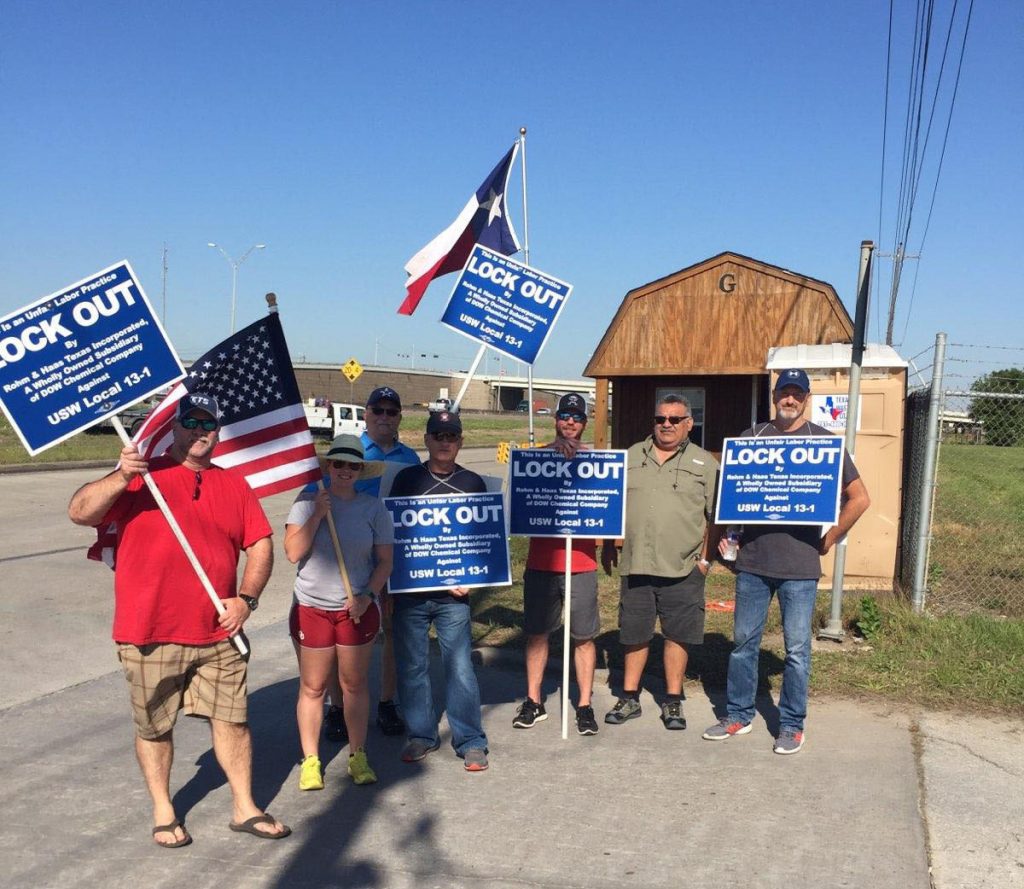 Here are details of the Dow Deer Park, TX Lock Out of the members of United Steelworkers Local 13-1 which is going on the 5th day.

PLEASE SEND MESSAGES OF SUPPORT AND SOLIDARITY TO:

On Monday, April 22nd at 2pm, all 235 bargaining unit employees were locked out by Dow Chemicals. This includes the 228 dues paying members of Local 13-1. There are several issues keeping the parties from reaching agreement including Wages, Overtime Distribution, and Arbitration provisions. The membership has twice rejected the company’s Last, Best, and Final offers. First by 96% and last time by 98% with heavy membership turnout both times.

While this should have sent a strong message to the company that their proposals were unacceptable and needed to be improved, the company took it as an opportunity to lockout its hard working employees and their families in an effort to cause them economic harm. This was done despite the fact that the Union had offered to keep working while bargaining continued.

The company’s wage proposal amounts to a 1.8% wage increase each year for 5 years. This wage proposal doesn’t keep pace with other petrochemical plants in the area, is nowhere near the National Oil Bargaining package and most likely won’t keep up with the cost of living. We have proposed a wage package that is more in line with the area and the industry.

The company’s overtime distribution proposal would radically alter the system that has been in place for years and eliminates any remedy in the event that someone is bypassed for overtime. It also requires that instead of there being a uniform policy for the plant, each unit would have a different process and the process could be changed yearly at the company’s whim. The company has admitted that currently all the overtime is being filled without issues and being done so without violating the company’s fatigue policy.

We have pointed out that understaffing has led to the large amounts of overtime being worked and that addressing that issue would go a long way to addressing this issue.

We have proposed that we return to a normal arbitration process. One that allows all grievances that can’t be resolved between the parties to be heard by an Arbitrator. The company proposes to continue a process that allows them to discipline employees up to the point that they are on the verge of termination without any recourse through the arbitration process.

The members are walking the picket line 24/7 and doing a great job. We have a pantry set up to assist members with food, diapers, and other essentials.

The Local is accepting donations large and small from other Locals or members.

Donations should be brought to the Union Hall located at 311 Pasadena Blvd., Pasadena, TX 77506.

Financial donations should be made out to USW Local 13-1 and put Dow Lockout on the memo line and send them to the Union Hall address. Anyone wishing to walk picket with these sisters and brothers is welcome to do so, they just need to check in at the Union Hall first and we will drive them out to the picket lines.