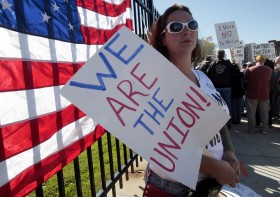 The percentage of private sector workers in unions fell to 6.9%, down from 7.2 %.

In 2009, for the first time in US history, government employees accounted for more than half the nation’s union membership, but the percentage of government workers in unions fell to 36.2 % last year, down from 37.4% in 2008.

The peak level of union membership was 35% during the mid-1950s, after a surge in unionisation and organising after World War II.

Whilst the latest figures can make for depressing reading, they must be set against the US economic situation, the anti-union stance of employers, wide spread union busting and the weakness of US labour laws.

There has been a growth in companies who are ideologically opposed to unions and aggressive in resisting organising campaigns.

In 2009, union membership fell by 771,000 largely because employment declined over all, but that decline followed a growth in union membership the previous two years of 739,000 because of increased employment and some large and successful union organising campaigns.

The US economy has seen large-scale layoffs in several sectors including in traditionally unionised areas – construction, manufacturing, teaching and local government.

But there is some good news to counter balance the bad. The bureau said that median weekly earnings for unionise workers — $917 — remained higher than the $717 in earnings for workers not in unions.

According to the bureau, New York had the highest unionisation rate of any state, at 24.2%, followed by Alaska, at 22.9%, and Hawaii, at 21.8%. But in so-called right to work states including North Carolina, Arkansas and Georgia union membership sits at 4% or below.

This entry was posted in International Trade Unions, Trade Unions. Bookmark the permalink.