US politics – Wither the Tea Party? 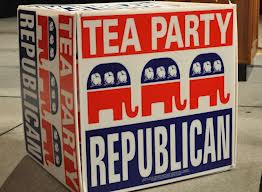 The once haughty Tea Party has been whittled down to only a nub of its former self, with only 8% of Americans now identifying themselves with the faction.

And no wonder – the fiery movement that sprang from legitimate anger over the government bailout of the Wall Street banksters who crashed our economy got co-opted by Republican political operatives fronting for those same banksters and such anti-government extremists as the Koch Brothers. With that rich-guys’ agenda, the party quickly lost popular support, leaving the nutty nub brandishing “tinfoil hat” issues.

Foremost on today’s Tea Party agenda is a full bore assault on something that isn’t even there: A United Nations’ plot to destroy American life and establish a UN dictatorship. Yes, the same international debating society that the right wing used to mock as meek and weak is presently being recast as a fearsome totalitarian behemoth stealing our sovereignty.

The UN’s weapon is a piece of paper titled ‘Agenda 21’. This is a series of non-binding UN recommendations to encourage sustainable economic growth in developing nations through voluntary actions. It’s an innocuous document with zero force behind it, passed way back in 1992 with the support of Republican President George H. W. Bush. Some threat.

But in recent months, ‘Agenda 21’ was lifted from obscurity and turned into a foaming-at-the-mouth cause by the far-out right’s nattering nabob of nuttiness, Glenn Beck.

So Beckian flakes are rushing to the barricades waving the tattered Tea Party banner to, by God, defend America from this – well, from this piece of paper.