American Airlines Staff Vote For Union – In US Southern States. 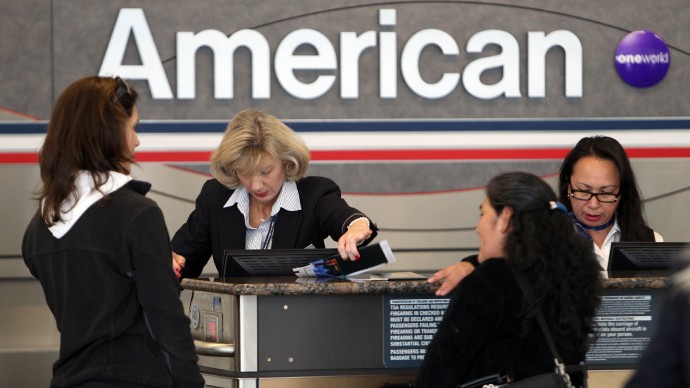 After a nineteen year battle 9,000 American Airlines passenger service agents have voted with the members of the US Airways CWA-IBT Association to form a new bargaining unit of 14,500 agents at American Airlines and it is the largest union organizing victory in the the southern USA in decades.

Three-quarters of the agents work in Texas, North Carolina, Florida and Arizona and 2,300 are home-based reservations agents.

By an 86%, airport and reservations agents chose representation by the Communications Workers of America-Teamsters Association in the National Mediation Board election.

Richard Shaughnessy has been an agent at Miami International Airport for 27 years and has been a leader of the American agents’ fight for a voice and bargaining rights.

“The merger between American Airlines and USAirways is an exciting time for all of us. But even more exciting is our victory today,” he said. “We’re the front line employees who interact with our customers every day, and we are looking forward to a positive relationship with management to make this merger ‘work’ for all of us. We are anxious to get to the bargaining table.”

Carroll Locklear is a home based reservations agent in Texas. “I’ve been with American Airlines for 18 years and through all of those years I have been praying for this day. We have been the odd employees out for so long, because we were the only employees without union representation. Gone are the days that management can take what they want when they want. This will be a win-win for all of us,” Locklear said.

“We feel stronger now with this vote,” Eula Smith, a customer service agent in Charlotte, said. “I’m a 60-year-old woman with 42 years with this employer. You can’t live in the South and make a decent wage unless you are in senior management in a corporation or belong to a union. We need this.”

Ken Grunwald is a 23-year-reservations agent, working at the call center in North Carolina. “I’m proud to remember everyone over the years who worked so hard for our union voice, who never gave up in the face of adversity, and who gave their blood, sweat and tears so that we would have the opportunity to celebrate this victory today. It’s a victory for all American Airlines employees! I’m so excited to think that we will finally be able to negotiate a legally binding contract. We now all have each other’s ‘back,’“ Grunwald said.

Vickey Hoots has been a US Airways reservations agent at the Winston-Salem N.C., cell center for 29 years. “This win was a long time in coming, at American Airlines, just as it was at US Airways. I’m so proud of all our members and we’re excited that we will be able to negotiate the industry leading contract that our members deserve,” Hoots said.

US Airways agents have been CWA members since 2000. US Airways merged with America West in 2005; passenger service agents at the former America West had organized with the IBT in 2004. After the merger, the CWA and the IBT formed the Airline Customer Service Employee Association, CWA-IBT.CWA represents 700,000 workers in telecommunications, media, airlines, health care, education and manufacturing.