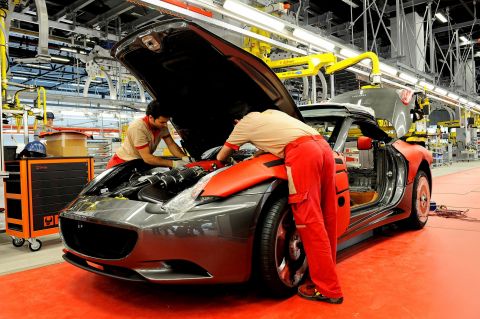 One would have thought that with all the business buddies the Tories have got, the government would be well clued up on manufacturing.

But apparently not. And the Labour Party is little better. So Britain’s biggest union Unite is working to get manufacturing back at the top of Britain’s industrial and commercial agenda.

Part of that project is to the change the image of manufacturing – getting people to see it as vitally needed employment instead of the “oily rag” image the Tories have tried to give it over the last three decades.

Since Thatcher’s days we have seen the influence of our service and financial industries creep ever wider as manufacturing was shunted into the background.

Again, that would not have caused so much economic and social stress if proper retraining and education, along with a clear manufacturing strategy, had been in place.

However, with growing pressure on the financial sectors, the spotlight is again hovering over manufacturing, and Unite wants Labour to grasp this opportunity.

Unite has developed a comprehensive 31-page strategy for the sector called 2020 Vision which has been around since late last year and is now required reading in the boardroom as well as the canteen.

Unite official Tony Burke explained: “The purpose of 2020 was to set out our strategy to influence the government, and, we hoped, to also influence the Labour Party to adopt a wide strategy.

“The government quite clearly doesn’t have a strategy. In fact, everything they seem to have touched in regard to manufacturing has evaporated.”

There has been some good news for manufacturing recently with developments at Nissan and Jaguar Land Rover, but there are still some fundamental structural problems.

“The government told the population not to worry because jobs lost in the public sector would be more than complemented by the private sector. But so far that’s not worked,” said Burke.

“The problem is that it doesn’t know what to do. However, we have had very favourable responses from employers to our 2020 (document) because many of the ideas are in line with their views.

Unite is calling on the government to adopt a proactive manufacturing strategy to defend strategic industries and put in place a national investment bank.

Public investment in strategic infrastructure projects and a rethinking of training and education policies would help to ensure that Britain is better placed to benefit from the green economy.

Burke said: “It seems to me the government is not taking the bull by the horns and saying if it is going to invest in manufacturing it has got to be a long-term project, so we put in place conditions and a strong base as in, perhaps, Germany.

“The government is wedded to outdated ideas – it believes in order to stimulate manufacturing and the economy it needs to cut workers’ rights. And that’s absolute nonsense. It has gone back to 1980s-style ideas.

“Our problem in British manufacturing is it is still viewed as blokes in overalls with an oily rag in their back pockets and smelling of Swarfega, but it is nothing of the sort.

“We have high-tech companies, some of the best skilled jobs and brilliant innovations, yet the image portrayed at schools and to the public is always smoke-stack industries.”

Unite is also keen on the idea of a government manufacturing tsar.

“We meet employers all the time and not many disagree with our strategic ideas,” Burke said. “There are some ministers who understand what we’re saying, but they are intrinsically opposed to any interventionist strategy.”

This article appeared in the Morning Star on April 7th