Unite to fight for a future for shipbuilding 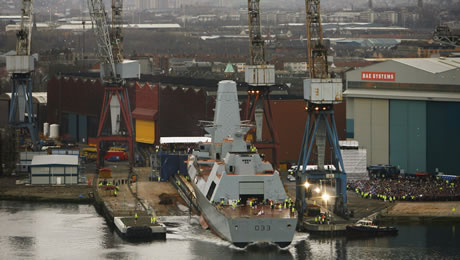 Unite, has said it will fight to retain as many of the 1,775 jobs under threat, following today’s announcement (Wednesday 6 November) about the future of the shipyards at Portsmouth, and Govan and Scotstoun on the Clyde.

Today’s announcement was prompted by the decline in work for the Royal Navy’s two new aircraft carriers as construction nears completion by the ‘carrier group’ of companies – BAE, Babcock, Rolls Royce and Thales.

Unite national officer for shipbuilding Ian Waddell said: “This is a very worrying time for the workforces and their families as the work on the two carriers comes to a conclusion.

“Unite will be working very hard to retain the maximum number of jobs at both Portsmouth and in Scotland.

“It is a huge blow to Britain’s manufacturing and industrial base, with many highly skilled workers faced with losing their jobs.

“We will have to examine the BAE business case in detail to see how we can secure a future for the workforces at both Portsmouth and in Scotland. We believe that, if this is approached in a constructive and innovative way, it can be achieved.

“The seeds for this situation were sown in the 1980’s when the Thatcher government used European structural funds to close shipyards, rather than funding investment that would have allowed Britain to compete in the global marketplace for shipbuilding orders against the likes of South Korea.”

Union reps will be meeting in Farnborough on Monday and Tuesday next week to discuss the full implications of today’s announcement.