Unite statement of solidarity with the people of Gaza 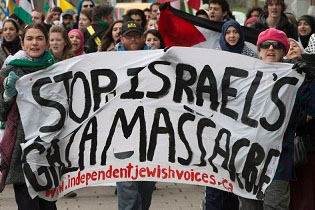 The following statement on the situation in Gaza was issued by Unite and signed by General Secretary Len McCluskey.

Unite the union unreservedly condemns the outrageous Israeli aggression against the Palestinian people of Gaza. Unite calls for an immediate halt to the continuing attacks that have so far caused massive destruction, enormous suffering, countless civilian casualties and terrorised an entire population.

For the last 45 years Israel has ignored and defied numerous UN resolutions and continues to occupy Palestinian lands and subject the Palestinian people to a system of oppression, discrimination and humiliation. The result of this has been to destroy the local economy and leave millions in poverty with little perspective for the future.

More recently Israel has embarked on a massive programme of illegal settlement building in the West Bank through which it has sought to change the facts on the ground while prolonging meaningless negotiations with no intention of allowing a Palestinian state to be created. .

Since 2006 when Hamas won the Palestinian parliamentary elections, the Israeli government has laid siege to the Gaza Strip in an attempt to isolate the government and punish the population. The massive fall in essential goods and materials allowed to enter the strip has left the people facing unimaginable hardship and struggling to find the basic essentials for life.

The huge escalation during the last few days stems from the illegal Israeli assassination of Palestinian leaders in Gaza, something that so clearly demonstrates the manner in which Israel intends to deal with its opponents as well as the arrogant Israeli contempt for the due process of law.

It is more important than ever that the international community unites and demonstrates its solidarity with the Palestinian people of Gaza at this critical time by demanding an end to this barbaric attack on defenceless civilians. No where is a change of attitude more needed than in the US where newly re-elected President Barack Obama should signal an immediate end to the US unconditional support for Israeli actions.

With a changed situation across the entire Middle East and North Africa the potential to bring about a sea change in the Israeli-Palestinian conflict and to end Israeli aggression is more possible than for many years.