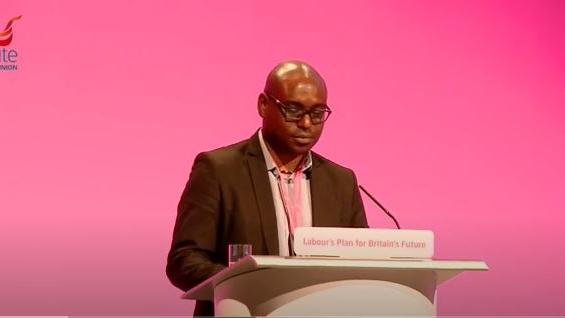 London’s biggest trade union, Unite, has slammed  the ‘abysmal’ decision to remove the only male Afro-Caribbean candidate from the Labour party list of candidates for elections across the capital this May.

The union says that the removal of Preston Tabois, a bus driver and Tottenham Labour councillor, reveals the party’s ‘double-standards’ and is calling for the decision to be reversed.

Mr Tabois had previously been endorsed by an NEC Panel, following a complaint about a tweet from several years ago. The panel explicitly said that Mr Tabois should remain a candidate.

However, an NEC panel has now voted to remove Mr Tabois. No reason for his removal has been given. Condemning the move, Unite regional secretary Pete Kavanagh said: “This is just an abysmal decision by the Labour party.  It’s an insult to Preston, to our union and more importantly, to London’s voters.

“One in three London voters is from the BAEM community. Candidates like Preston from the Afro-Caribbean community show that Labour stands up for and speaks for all our London communities.

“Preston is Labour through and through. He is a bus driver who knows this city inside out and who will always work to advance the interests of working-class people.

Unite national officer for the union’s BAEM membership, Harish Patel, added: “Voters will rightly be asking why the Westminster candidate for Hartlepool has been allowed to apologise and move on for his insulting comments about women, but Preston Tabois is not allowed to do the same about one post he shared seven years ago.

“Such transparent double-standards will cause anger. The party already has a real problem reaching and engaging the BAEM community at the best of times. This just made that job so much harder.

“To remove the only male Afro-Caribbean candidate from the party’s entire list of 10 for the capital is an appalling move.

“It has to reverse this decision before irreversible damage is done to our relationship with the Afro-Caribbean working class, not just in London but across the country.”

All of which begs the question what is going on the Labour Party? The Party rams through the nomination of a candidate in the Hartlepool by-election with a long list of one and despite sexist tweets referring to women as MILFs he gets excused as it was ‘historical and he apologised’, yet Preston, a decent man, a black man, and a working bus driver who originally gets through is removed from the party list of candidates by another panel?