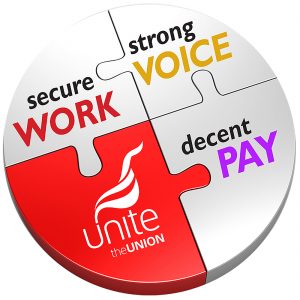 Unite has dveloped a ‘Pay Claim Generator’ which will help in the fight for increased pay and a fair share of company profits especially at a time when there is pay stagnation.

Unite’s union representatives will now be able to arm themselves with the latest financial information and help prevent employers from claiming pay increases “are not affordable”.

At the click of a mouse the latest up-to-date information can be gleaned from Companies House, the Office for National Statistics and Unite’s own database containing the details of tens of thousands of pay deals.

A bespoke comprehensive pay and conditions claim can be created, including the most up-to-date information on their company’s financial performance, their ability to pay, the latest economic indicators and pay deals at comparator companies by sector and postcode.

Sharon Graham Unite’s Executive Officer said: “Unite is working with members to ensure they have the best tools, information and representation to increase their pay and conditions. Unite’s Pay Claim Generator will help stop employers from claiming pay rises are not affordable where they clearly are.

“Over the last decade pay has shrunk while company profits are up and corporation tax is down. Workers deserve their fair share of the profits they created.

“Unite has secured some great pay deals at companies like Rolls Royce, Jaguar Land Rover, Thomas Cook and Virgin because workers do better when they are in a union. Unite’s ‘Work, Voice, Pay strategy’ is about working with members to help them win at work.”

For more information about the Pay Claim Generator see the following guide.