Unilever – hands off our pensions! 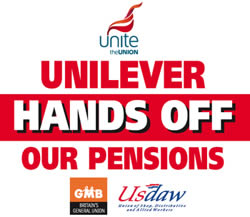 Unilever is planning a massive attack on  workers pensions. The food and household goods giant, whose brands include PG Tips, Marmite, Pot Noodle, Dove, Comfort and Surf, plans to close it final salary pension scheme that its long-serving staff have worked hard for and break its promise to protect their pensions.

They want to transfer current members to the inferior Career Average Revalued Earnings (CARE) scheme from 1st January, 2012. But they also want to make more detrimental changes to the existing CARE scheme so everyone loses.

Shutting down the scheme will wash the retirement plans of 5,000 workers down the drain – one worker has already estimated he will lose a massive £150,000 from his pension pot if he lives for just 15 years after he retires!

This attack is a betrayal!

Workers along with their trade unions, Unite, Usdaw and GMB are determined to fight back against this attack on their pensions.

Support workers as they battle this attack on pensions that will destroy their retirements and communities.

Email your message of support to workers below or send a protest letter to Unilever to demand these changes are stopped.

Join our campaign– Unilever – HANDS OFF OUR PENSIONS!
Email your message of support here.