UK Unions Warn: ‘This Is A No Deal Coup’ 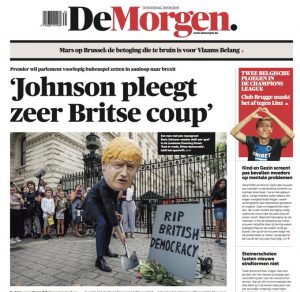 ”The claim that the government is considering proroguing parliament in September in order to stop MPs debating Brexit is entirely false.’’ Government statement to the Observer newspaper.’

British trade unions reacted furiously and condemned the Johnson government’s actions in suspending parliament yesterday as a ‘No Deal Brexit Coup’ which will damage jobs and working class communities while Johnson and his cronies will be ‘sitting pretty’.

Unite’s Len McCluskey accused prime minister Boris Johnson of a ‘no deal Brexit coup saying:“Johnson’s plan to shut parliament is nothing short of a no deal Brexit coup which imperils the livelihoods of millions of workers and the future prosperity of communities across our nations.

“With the future of places such as Vauxhall’s Ellesmere Port plant hanging by a thread, wrapping the suspension of parliament up with empty promises on education, police and the NHS is an insult to voters desperate for decent public services and a reversal of austerity.

“Johnson knows full well that a no deal Brexit will devastate our public finances and whole swathes of the economy. Have no doubt it will be Johnson and his friends in the wealthy elite who will be sitting pretty in the event of a catastrophic no deal Brexit, while working class communities pay the price.

McCluskey called for a General Election: “Whichever way people voted in the Brexit referendum, they did not vote for our democracy to be shut down and to lose their jobs. The prime minister should call a general election rather than silencing parliament to push through a disastrous no deal Brexit. I urge all sensible politicians from all parties to stand up and come together behind Jeremy Corbyn to block this no deal Brexit coup.”

Unison’s Dave Prentis said that the government actions smacked of a dictatorship with the government treating the UK’s future like a political plot: “This outrageous manoeuvre has been made to silence all opposition in the most dictatorial way. Our parliamentary democracy is the envy of the world, but it’s being stamped upon and disregarded by a Prime Minister who’s not gone near a public vote.

“Boris Johnson is treating the future of the UK like the plot of a far-fetched political TV drama. The country must be asked for its view on Brexit right now. That’s the only way.”

The TUC General Secretary Frances O’Grady said:  “This is a deliberate ploy by the prime minister to duck basic democratic scrutiny, at a time when people’s jobs and livelihoods are on the line. By denying parliament a voice, this government is treating the people with contempt.

“The effects of crashing out of the European Union without a deal would be felt for a generation. People and parliament together can stop this.

“We’ll support any democratic initiative to stop a disastrous no-deal whether through legislation, a general election or a popular vote.”

Train drivers union ASLEF general secretary Mick Whelan warned of civil unrest: “Whatever your views on Brexit, the democratic process must underpin what is done in all our names — or civil unrest will be the result.

“It is disturbing that a Prime Minister, who only has a mandate from the Conservative Party and not from the electorate, is trying to undermine the foundations of our democracy.”