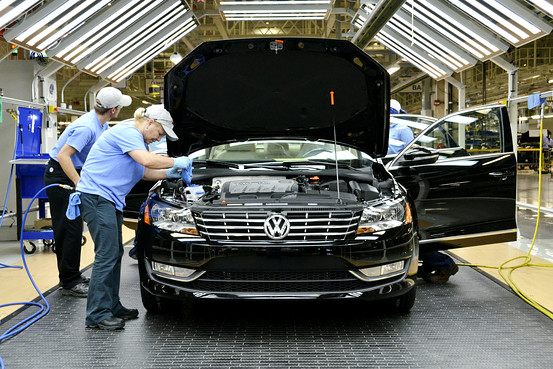 The United Auto Workers have filed an objection with the U.S. NLRB yesterday asking it to set aside the results of a ballot last week in which workers at a Tennessee Volkswagen plant voted against union recognition in Chattanooga.

The appeal cites “interference by politicians and outside special interest groups.” The  U.S. National Labour Relations Board will investigate the election and decide if there are grounds to scrap it and hold a new one.

The move now ramps up a battle with anti-union right wing Republican groups that intensified as the UAW, has tried hard to organise workers at EU and Japanese auto plants across the Southern “right to work’ states.

The UAW will have seven days to provide evidence to its claim. An NLRB regional director will investigate and a hearing will likely follow.

The UAW said in a statement that its appeal details “a coordinated and widely publicised coercive campaign conducted by politicians and outside organisations to deprive Volkswagen workers of their federally protected right to join a union.”

The election loss at the plant in Chattanooga was a blow to the UAW, which had agreed a German style ‘works council structure’ with the VW management after working closely with the giant German union IG Metall. The vote went 712-626 (53% to 47%) vote – the UAW only needed a further 44 more votes in favour of the union to win.

Right wing Republicans ran a campaign consisting of misleading statements, anti-union advertising and scare mongering against the UAW in the final days of balloting.

The most vocal critics of the union was Tennessee Republican Senator Bob Corker, the former mayor of Chattanooga who’s conduct the UAW said was “shameful and undertaken with utter disregard for the rights of the citizens of Tennessee and surrounding states that work at Volkswagen.”

Corker had said publicly that he had learned Volkswagen would bring an additional production line for SUVs to the plant, creating more jobs, if workers rejected the UAW.

However, VW officials contradicted Corker saying a decision on the additional line was unrelated to the election.

The UAW believes Corker’s misleading statement about the SUV production spooked workers at the plant. The UAW ran a ‘phone-bank’ during the ballot – and and following Corker’s statement they heard from VW workers who once in favour of a union moving to  neutral or to opposition to the UAW.

Posters paid for by ‘right wing causes’, depicting the UAW as being responsible for the collapse of the auto industry in Detroit were prominent in Chattanooga and staff who would not have been part of the UAWs area of representation took part in the anti-UAW campaign.

President Barack Obama, accused politicians in Chattanooga of being “more concerned about German shareholders than American workers,” according to a Democratic aide who heard the remarks at a closed meeting with lawmakers.

UAW President Bob King blasted what he called “extraordinary interference in the private decision of workers to have a U.S. senator, a governor and leaders of the state legislature threaten the company with the denial of economic incentives and workers with a loss of product.”

Click on the link win the first paragraph or the photo to read the UAW case to the NLRB.