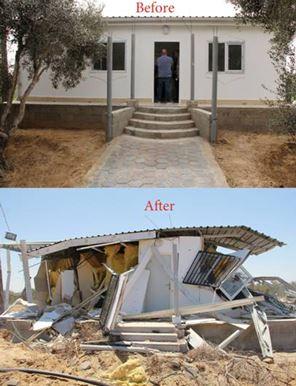 TUC Aid is appealing for donations to rebuild the Beit Lahia Plant Nursery in Gaza, which was badly damaged during the 2014 Israeli offensive.

The majority of Gaza’s 1.6 million people are children and refugees living under siege. Access to fuel, water, energy and food is heavily restricted by the Occupation, and agricultural land is encroached by the Israeli free fire zones around the borders. Four in five people survive off humanitarian aid.But amid chronic levels of unemployment and hunger, agriculture in Gaza can provide a lifeline.

The Beit Lahia Plant Nursery was created to help the people of Gaza to increase their income and improve food security. The nursery was established through the MA’AN Development Center in Gaza with the proceeds of a previous TUC Aid appeal and financial support from APHEDA – a trade union solidarity support organisation in Australia.

Unfortunately, the Israeli aerial and naval bombardments and the land invasion caused extensive damage to the Beit Lahia plant nursery. Some 50,000 trees, saplings, and seedlings withered and died due to lack of irrigation during weeks of military offensive by the Israeli Army.

The losses include 1581 olive saplings, 869 poppy saplings, 44,300 tomatoes seedlings, and 12 citrus trees. On 21 July, the office of the MA’AN Development Centre was badly damaged when the Israeli military shelled and destroyed the residential apartment building opposite.

The TUC General Council deplored the attacks in their statement in July 2014.

A statement adopted at Congress in September committed the TUC to step up the campaign for a free Palestine.

How you can help the people in Gaza. Even if you can only give a little, it will still go a long way in bringing relief to them. For example,

Follow the links and you can pay via Paypal.