Tommy Campbell: The trade unionist who stood up to be counted 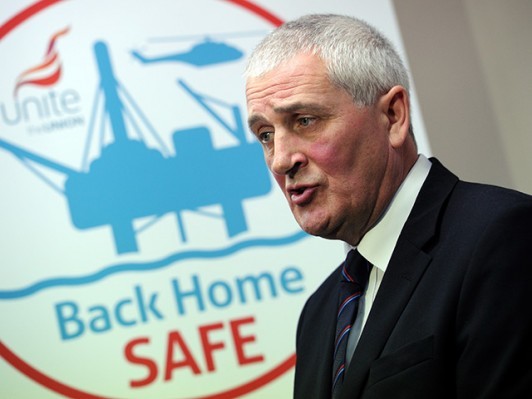 Tommy Campbell has reached a crescendo as he speaks with pride of his work organising oil and gas workers over the last five years.

Today, labour movement activists from Aberdeen and across Scotland will gather to celebrate Campbell’s 50 years of campaigning for a better world, as he retires as an official of trade union Unite.

But fighting injustice was never alien to this man who cuts a serious if unassuming figure. Growing up in Enniskillen in the north of Ireland in the 1960s, it was hard to get away from it, after all.

And though this wasn’t confined to the region’s political conflict, protests took their lead from the civil rights demonstrations of the day.

Campbell organised a demonstration against corporal punishment at his Christian Brothers’ school, where “if you stepped out of line you always got six of the belt.”

The thousands-strong civil rights demos against anti-Catholic gerrymandering had the slogan “one man, one vote.” For Campbell and his teenage comrades, it was “one boy, one slap.”

I met Campbell and his partner Alison for a curry in Aberdeen a few weeks before he clocked off for the final time. He told me his life could have taken a very different direction — had he fulfilled his grandmother’s wish for him to become a priest.

“I’d been an altar boy for three years. My granny wanted me to be the first Irish pope. But by that time I was beginning to feel the violence of the priests. I organised a protest to refuse to hold out your hand for the strap, and of course I got a battering for that too.”

He and fellow school students also joined factory workers at the civil rights protests. When he was finally transferring to a mixed-faith education, his headmaster told him: “You’ll not do well at that den of iniquity called the technical college.”

What Campbell witnessed and experienced — both antagonism and solidarity — would serve him well over his decades to come in the trade union movement.

It was some years yet when he would have his first experience of workplace conflict. He’d been employed by Enterprise Ulster, a public-sector organisation set up to provide work for young people on both sides of the conflict in Northern Ireland.

Campbell started a job working on building sites in 1978, on the same day workman Patrick Fee, a Catholic civilian, was shot by a Provisional IRA sniper.

It is thought Fee’s assassin had intended to kill the van’s driver, an off-duty Ulster Defence Regiment volunteer.

Like Fee, Campbell was expected to travel in an unmarked van at a time when it was known that such vehicles were being used by SAS operatives in Northern Ireland.

He was initially met with resistance, but when it became clear the workforce could resist collectively, “by Thursday those vans were getting sprayed.”

Campbell ended up unemployed and blacklisted a few years later. But in a path that will be familiar to many in the movement, it was this which led him to a period of intense activity as secretary of the Fermanagh Trades Council.

Some comrades were not just taken aback by his youth, but by the fact that a man from Enniskillen was taking a leading role in the trade union movement across the north of Ireland.

“I used to say: ‘You’re street-wise in Belfast, but we’re country lane-wise in Fermanagh,” Campbell chuckles. He was also responsible for the only trades council newspaper in the six counties.

Before long, however, he was back in work — now as a development officer for the Ulster People’s College, a community project which put him at the heart of early efforts towards peace.

He was still active in the trade union movement, and now secretary of Northern Ireland Trade Union CND, and a key player locally in Medical Aid for Vietnam and the Communist Party.

But two brothers had moved to Aberdeen to work offshore. This was both a symptom of how hard Thatcher’s austerity had hit Ulster, and an embodiment of the latest chapter in Scotland’s social history.

After successfully applying to be a development officer at an unemployed workers’ rights centre in Aberdeen, he too made the move across the Irish Sea.

It was a four-year contract, and under Campbell’s stewardship saw huge growth in staffing levels and, more importantly, in the number of unemployed workers that it serviced.

He continued his union activity and threw himself into organising the anti-apartheid movement in Aberdeen, co-ordinating the first march for awarding the Freedom of the City to Nelson Mandela.

During the 1984-85 miners’ strike, Campbell co-ordinated solidarity exchanges between pitmen in Ayrshire and workers in Northern Ireland.

“Most of them were Orangemen,” he recalls of the colliers, “and I had to ask them to wear long-sleeve shirts.”

With paramilitary tattoos on both sides of the meeting — and the Troubles — it made sense to not begin on a note of antagonism. But then Campbell asked the men to roll up their sleeves.

“Once in conflict [with the boss class], people can realise actually we have so much in common,” he comments now.

When his contract finished at the centre, Campbell moved to the Transport and General Workers’ Union, where his primary responsibility, until five years ago, was representing council officers.

“One senior officer referred to me as ‘that Irish nightmare’,” he recalls, saying it was a moniker he adopted as a badge of honour.

In almost 20 years in this role, he has overseen dozens upon dozens of disputes, from the profound, such as winning significant equal pay settlements, to the truly bizarre, like the council’s issuing of “diddymen hats” to female city wardens.

But Campbell is clear that it’s the shop stewards who are the “real heroes” of Aberdeen’s labour movement, “and the workers who support them in that role.”

He thinks it’s crucial that the movement shows young workers it is there for them, even if that means being open to workers in dispute who may not have previously even been aware of unions.

“There’s no point giving them a lecture saying: ‘You should have been in the union in the past few years’.”

That he himself started so young has also taught him the importance of mentoring others. Aberdeen has Britain’s youngest trade council president, Sasha Brydon, and Campbell is proud of this.

All the while through his time in the movement, Campbell has been a daily reader of the Morning Star — and in recent years, a prime contact for me, first as the paper’s industrial reporter and Scotland editor.

“There’s not a lot in that paper,” Campbell recalls various newsagents saying over the years as he puts it on the counter. He always replies: “But it’s good quality news in here.”

I first made contact with Campbell at the tail end of 2014, my first year working at the Star, when a collapse in the global oil price was leading to attacks on terms and conditions in the North Sea.

After 14 years working in local government, the retirement of Unite colleagues led his seniors to ask him to take up the offshore brief.

Relations between Unite and the other unions which represent oil and gas workers — the GMB and the RMT (since the Offshore Industry Liaison Committee merged into the transport union) — have not always been easy.

Campbell was crucial to the establishment of the Offshore Co-ordinating Group of trade unions, which includes the main trio, along with maritime union Nautilus and Balpa, which represents helicopter pilots flying workers out to the platforms.

“I’m very proud of the legacy I’ll leave behind,” Campbell says. “Over the last five years, I along with others have worked very hard to create unity between the unions working offshore. The reason membership has increased is workers see us working together for the common good of the offshore worker.”

Tommy also was instrumental in helping build trade union solidarity with the Norwegian oil union Industry Energi who organise oil and gas workers on the Norwegian shelf on the North Sea. In 2018 Tommy was key in generating support for and getting media coverage in Scotland for the 700 day long strike at Exonn Mobi/UGL/Cimic  in Longford, Australia.

Cross-union activity will also keep Campbell busy in retirement: he intends to stay active in the Aberdeen Trades Union Council.

But he also plans to devote more time to two long-standing interests: photography and writing poetry. And with Alison, he plans to learn to salsa dance ahead of a holiday in Cuba.

Campbell can head into retirement, however, knowing he stood up to be counted. “I knew what side of the fence I was on — the workers’ side, I always was, and I always would be.”

This entry was posted in Blogs, Trade Unions. Bookmark the permalink.