Labour Party Conference – One Nation Under A Groove 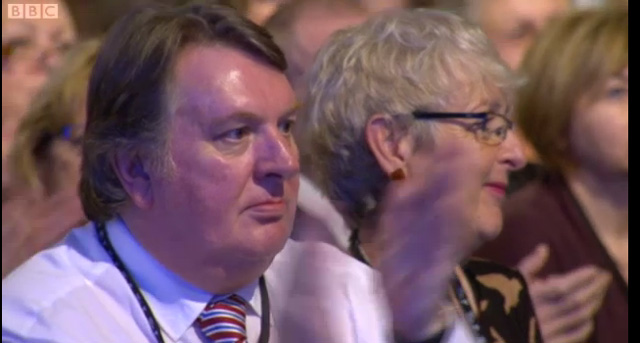 From the BBC. Listening to the ‘One Nation’ speech yours truly and my Unite AGS comrade Gail Cartmail.

This weeks Labour Party Conference was of course dominated by Ed Miliband’s wonderfully executed speech on Tuesday – now dubbed by some Unite wags as ‘One Nation Under A Groove’ (See Funkadelic, 1978).

Described by Len McCluskey as a tour-de-force, giving hope to the country, it immediately put the Tories and their friends in the media on the defensive and gave Ed a boost in the polls.

Low on detailed policy? Well with over two years to go to an election thats not surprising. The policies will come – but they need to be radical enough to win firm, wide and popular support.

So what of the conference itself? The excellent debate on the privatisation and Coalition lies on the NHS was topped off by a barnstorming speech on the NHS by Andy Burnham and there was a hard hitting demolition of the Tories policing policy by Yvette Cooper – and her old man, Ed Balls still can’t tell jokes!

The biggest gripe from delegates was the lack of actual time allocated for debate from the floor. Key issues such as on austerity, manufacturing and employment rights with  Len McCluskey leading off the debate and other speakers from Unite intervening, got limited time – as little as 35 minutes in one session – and they were still punctuated by too many speeches by shadow ministers who took too long.

Equally, the Olympics tribute was good (thanks Danny Boyle) and having the games makers, families and coaches at the conference was too – but it was stretched out until lunchtime. Too much flag waving, too much Vangelis and not a mention of Ken Livingstone who did as much as anyone to get the games to London – airbrushed from history – disgraceful.

The economics lecture by Michael Sandel (Daily Mail calls him ‘Ed’s new Guru’) was great – but some delegates queuing on Tuesday for Ed’s speech said that they felt it was “out of place”. Its not what they come to the Labour Conference for they said. Another issue was too many ‘sofa sessions’ – they appear to have grown in number – all adding up to the fact that delegates sent by unions and constituencies, having worked hard on speeches and wanting to have their say feel squeezed out.

The number of fringe meetings has grown to mega proportions. I can recall the “good old days” of the Tribune Rally and a handful more at lunchtime and straight after conference held at hotels on the seafront at Brighton and Blackpool. (Yeah, I know, the days when Harold Wilson lit up his pipe and most of the NEC smoked fags on the platform!)

Now they start at the crack of dawn, again at lunchtime and from late afternoon to gone nine o’clock – and they are everywhere, every nook and cranny. Most people try and attend those in the ‘ring of steel’ to avoid the security queues and Manchester’s wet weather.

Unite’s fringes were in the marquee in the conference area – and pleasingly, they were packed. TUC General Secretary Designate Frances O’Grady was more visible at a Labour Conference than any other TUC GS I can ever recall and she got a warm reception wherever she went and author, critic and blogger Owen Jones appeared to be on every platform everywhere! Good attendance to at the TUC’s fringe on Beecroft and the policy forums I attended (Britain In the World and Prosperity At Work) were also packed.

However, Shadow Ministers should look out for criticism that they are supposed to attend the Policy Forums as a team to listen to the debate, take questions and feed in ideas and comments into policy – not make a statement and rush off elsewhere.

That said it was a good week for Labour. The anger at what the Tories and their Lib Dem chums are doing to this country was boiling over and at last we went onto the real offensive. The Tories next week will try and paper over the cracks, but with Johnson, Mitchell (who has been told not to attend I hear), the fiasco over the West Coast mainline etc it will be a bad week for the “incompetent, hopeless, out of touch, U-turning, pledge-breaking, make-it-up-as-we-go-along, back-of-the-envelope, miserable shower”