The UK’s budget deficit is rising not falling

This piece show that the British budget deficit is now rising, not falling. Revenues have grown because of nominal GDP growth. But expenditures have risen because of, not despite cuts. This is unavoidable under ‘austerity’, as government spending cuts exacerbate the refusal of the private sector to invest, which is the cause of the economic and fiscal crisis.

The latest public sector borrowing data shows that the UK budget deficit is widening once more. Indeed despite a series of accounting adjustments which obscure the true picture, it is clear that the underlying trend is also towards rising, not falling deficits.

The Office for National Statistics reports that the June public sector borrowing total was £14.4bn, £500 million higher than in the corresponding month in 2011. However monthly data are erratic and subject to significant revision. Taking the data for the first 6 months of this year as a whole is more meaningful and shows that the deficit over that period is £37.3bn.

But this total is flattered by the strange decision relating to the acquisition of the Royal Mail Pension funds ahead of planned privatisation. In effect the government has decided to include the assets of this fund, but not its much greater pension liabilities in its own accounts. This and another smaller transaction lowered government borrowing by £30.3bn. The underlying deficit, excluding these transactions is therefore £67.6bn in the first 6 months of this year. 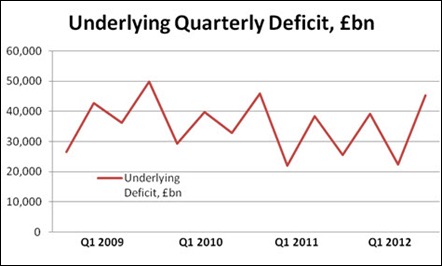 Factors Affecting Borrowing
This deterioration in the deficit places British government finances in a growing band of European economies where sharp cuts in government spending are leading to economic contraction, which in turn produces widening deficits.

This should come as no surprise. As the crisis is effectively an investment strike by capital, spending cuts by government will only lead to a further decline in private investment. The reason this logic has taken some time to work through in Britain is due to a number of factors. These are primarily the zig-zag in government policy, which initially saw an very modest increase in government investment under Labour and so produced a reduction in the deficit. This was compounded by the uniquely high level of inflation during the British slump, which eroded the real value of all government spending.

SEB has previously shown that the very moderate increase in government investment from the 2009 Budget under Labour was the catalyst for a modest economic recovery. Because of the increase in government spending (including allowing welfare payments to rise automatically as unemployment and poverty increased) the Treasury forecast that the deficit would rise to £178bn in the following financial year. In the event, the deficit began to decline and was £158bn for the financial year.

In addition, the effects of economic growth are felt on both sides of government accounts. Expenditure is lower than it would have been because more are in work and the benefits’ bill falls. Revenues are higher because incomes, profits and consumption all raise the level of tax revenues.

It is widely known that government policies have led to economic stagnation. Yet it is only now that the deficit has started to rise. The British economy has grown by just 0.5% in the two years since the Coalition came to office. But in nominal terms, before taking account of inflation, the GDP has increased by 6.1%. This surge in inflation during the slump is highly unusual, placing Britain on a par with countries such as Iceland. Britain has an incredible shrinking economy when measured in international currency terms.

Domestically this is reflected in a surge in inflation. While severely denting the purchasing power of all those on fixed or low-growth incomes, the fiscal effect was to increase nominal government revenues by £56bn over the last 2 years. This compares to annualised nominal growth in GDP of £88bn.

The Treasury’s estimate is that every £1 increase in economic activity will lead to a 50p increase in government revenues. In fact the increase over the last two years has been 64p (£56bn of revenues of £88bn increased output). However, government current spending has also risen by £42.3bn over the same period. This is an inevitable consequence of the savings (i.e refusal to invest) by firms.

This points to the essential fallacy of all ‘austerity’ measures, whether from the Coalition’s frontal assault, or the slightly shallower, slower cuts favoured by current Labour policy. Even nominal growth will largely be reflected in increased government revenues. But spending cuts have the effect of weakening economic activity and so drive up government expenditures.

Even in the narrow terms of reducing the deficit, the only effective prescription is growth. The most effective means of promoting growth, as even the cautious 2009 Labour Budget shows, is for the government to increase investment.