The Rise Of alt.labor – The Sequel 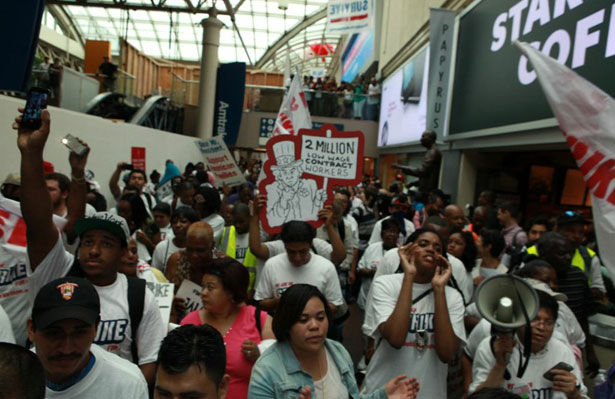 In a blog posted on this site yesterday I reported on the growth of strikes by non-uniosed workers in US fast food outlets. The strikes and “surprise” strikes are now spreading to other non unionised areas besides “fast food”.

But sticking with “fast food” for a moment, reports from St. Louis say workers at a Jimmy John’s restaurant walked out in a “surprise” strike, with walkouts spreading to other areas of the city and other restaurant franchises.  The strikes are being organised by workers backed up by a coalition of community and faith-based groups – with the aim of getting a wage hike to $15 per hour.

In a new twist to the alt.labour protest hundreds of non-union workers in Washington DC recently walked out at Smithsonian museums, the Old Post Office, Ronald Reagan buildings and Union Station. The strikers are part of a a campaign dubbed “Good Jobs Nation”, again backed by community groups. They are demanding that President Obama take action to improve wages and working conditions for workers employed under federal contracts.

One worker said that the federal contractor ICC Cleaning pays her $8.75 an hour. She said she’s supposed to get regular check-ups for a serious heart condition, but only sees a doctor when she goes back to El Salvador, because she’s uninsured.

Good Jobs Nation is backed by the community organizing group “OUR DC”, the clergy group “Samuel DeWitt Proctor Conference” and the labour federation “Change To Win”.

The AFL-CIO has now a stated goal of opening “storefront” operations in every state under the name “Working America” in order to agitate for higher wages and better working conditions.