Don’t be stupid, be a smarty, Come on and join the Nasty Party! 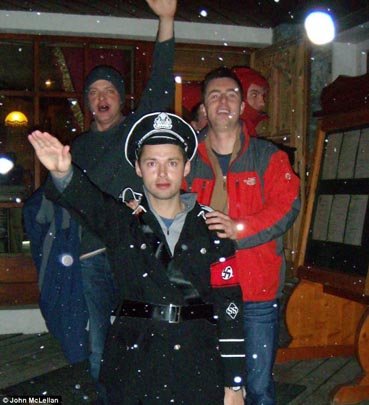 TURC's Auden Burley's chums on a night out!

The ultra right Trade Union Reform Campaign (TURC) is to re-launch itself today at the House of Commons. TURC’s aim is to attack trade union rights and undermine workers‘ access to justice in the workplace.

The looney’s behind the TURC include an array of bigots, disgraced ex-Minsiters and right wing nutters – here are a few of them…

The campaign’s chairman is none other than the disgraced MP Aidan (‘Allo Allo’) Burley who was sacked for attending a Nazi themed stag party in a ski resort France last year and is under investigation by the French police.

Its CEO is Mark Clarke, who failed to win a seat in the 2010 general election, he has been described by senior Tories close to David Cameron, as a ‘liability’.

The third person in the TURC is Andre Walker who had to resign his post when he was caught boasting about a smear campaign.

The former defence secretary, Liam Fox, who was forced to resign in disgrace and after clinging onto power over his relationship with ‘travelling companion’ Adam Werrity, will sit on TURC’s parliamentary council.

Also on TURC’s parliamentary council is Tory MP, Dominic Raab, who in January last year hit out against feminists, branding them ‘obnoxious bigots’ whose actions have led to men suffering discrimination ‘from the cradle to the grave’.

TURC also has close links with the Young Britons‘ Foundation (YBF) which is an ultra right wing group of Hooray Henry’s which tries to promote right wing conservatism in schools, colleges and universities. The organisation has described the NHS as the biggest waste of money in the UK.

Priti Patel MP is a significant supporter of TURC, has produced joint research for the group and has publicy supported the use of the death penalty in the UK.

The organisation is campaigning to ban employer funded trade union representatives in the public sector and to remove government funding to help improve employees’ access to learning and education and funding for improving employee relations.

Unite has pointed out the findings from the Department for Business itself which shows that the work of union representatives actually saves employers around £1.1 billion annually by helping to resolve disputes and preventing illness and injury at work.

Unite general secretary, Len McCluskey, said the TURC was a rogues gallery full of “discredited Tories and unpalatable right wing views” and  that the TURC was “the true face of the Tories”.

“The group’s sole aim is to undermine ordinary workers’ access to justice and support in the workplace. This anti-union group even has strong links with the Young Briton’s Foundation which describes the life saving NHS as a waste of money.”