The Logic Of Privatisation Of The East Coast Mainline 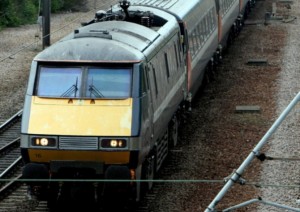 The Coalition government has announced its intention to privatise the East Coast mainline rail network. The network was nationalised 3 years ago when the previous private operators discontinued their franchise because they could not make a profit.

The re-privatisation of the East Coast mainline highlights a key fallacy of the current government’s failed economic policy. It also sheds light on the role of the state in resolving the current crisis.

The stated aim of government policy is to reduce the public sector deficit. George Osborne has swindled and fiddled the figures in a desperate attempt to hide the real position that the deficit is actually rising, including accounting for the assets of the Royal Mail pension fund but not their liabilities, counting government interest paid to the Bank of England as income and withholding payments to international bodies. All of these devices can only massage the deficit temporarily. They cannot produce either growth or, because of that, a lower deficit.

Investment in rail could form an important part of an investment-led recovery, which would also have the effect of reducing the growth in carbon emissions. But private companies struggle because they cannot continually increase profits while very large scale investments are required. They are certainly not in the business of depleting profits further to allow investment. All the large-scale investment in rail projects over the recent past has been led and co-ordinated by government. Returning the East Coast line to the private sector will not produce increased investment.

Privatisation will also undermine the stated objective of debt- and deficit-reduction. In public hands the line has returned £640mn over 3 years to public finances. With current very low returns on capital and low government borrowing rates this represents a very sizeable return. Government propaganda is that ‘we can either invest in rail, or the NHS’. In reality, investment in rail helps to pay for the NHS.

It is possible to establish the value of the rail line which is now on the chopping block. That can be done by using Net Present Value (NPV) methods. NPV simply values all investments from the cashflows they generate. £640mn over 3 years is about £215mn each year. Currently the government’s long-term borrowing rate is just under 1.9%. So, what sum of capital would be needed to yield £215mn a year to the government when interest rates are at 1.9%? If the interest rate is 1.9% and the actual return is £215mn, the NPV is £11.3bn (that is, 215 divided by 0.019).

Therefore any sale of the East Coast franchise for less than £11.3bn is very poor value, one which will see the deficit and the debt rise faster than if it were kept in public hands. The government will be lucky to get one-tenth of that value from a private sale. The giveaway has nothing to do with growth or deficit-reduction. It has everything to do with restoring the profits of the private sector, which is the purpose of austerity.

In addition, the private sector must provide a profit to shareholders. These are funds that cannot be used for necessary investment. As a result, under privatisation, the government subsidy to the rail industry (which is almost wholly for capital investment) has actually risen in real terms to £3.9bn last year from £2.75bn in the late 1980s when it was in public hands.

The private sector is unable or unwilling to make the necessary investment in the rail infrastructure. Its overriding objective is to provide a return to shareholders. The greater risks associated with the private sector mean that the state is better placed to make those investments. The real alternative, aside from government propaganda, is that the state has to fund this capital investment in either event. Keeping rail in the public sector, and taking the remainder into public ownership is simply a cheaper and more efficient option.

The same logic also applies to a series of other industries including energy, telecoms and post, house building and large-scale construction, education, and banking.

First published on the Socialist Economic Bulletin and republished with permission.