The economic consequences for Germany of the crisis in the Eurozone

Germany derives enormous benefits from the existence of the Euro. As Europe’s most productive major economy, it has a ‘home’ market where currency risks have been eliminated, along with the possibility of competitive devaluations. Its trade with the rest of the world also benefits from the existence of the Euro. This is because the Euro is comprised mainly of economies that are less productive than Germany, and so the Euro is weaker on the currency markets than a Deutschemark would be.

Germany is even deriving immediate benefits from the current crisis. The yield on 2-year German debt (‘Schatz’) offered at the latest auction of government bonds was zero. Germany is able to borrow in the international markets for free as capital is switched away from government bonds in the crisis-hit economies. Some in the financial markets believe this also heralds a renewed fall in the Euro versus the US Dollar, which would provide a further boost to German exporters (although also raising the cost of imported goods and raw materials). In the chart below the US Dollar/Euro exchange rate is shown on the orange line, while the 2-year Schatz yield is shown on the yellow line. 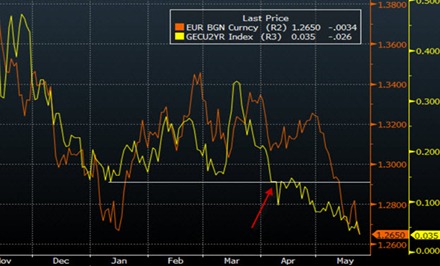 But these are crisis effects and are unlikely to be sustained over time. Two other important factors are likely to weight heavily in the deliberations of German policymakers. The first is shown in the chart below, which is the share price of Germany’s leading bank Deutsche Bank.

It is widely asserted that the EU and the Euro Area can contain any ‘contagion’ effects arising from a Greek exit from the Euro. This is mainly, but not exclusively, argued by those currently threatening the voters of Greece against voting for anti-austerity parties. The argument runs that this is a referendum on the Euro (when it is clearly a referendum on ‘austerity’) and that, if the bailout terms are rejected, Europe is strong enough to withstand the impact of a Greek exit. An obvious rejoinder is that the so-called firewall of €750bn to protect the private sector from a Greek exit is not in place and that crisis-hit countries such as Italy, Spain, Ireland and Portugal are supposed to provide one-third of that fund between them. They are clearly in no position to do so.

But Deutsche Bank’s share price provides its own verdict. Half of its value has been lost since April 2010, and one third has been lost in the last 3 months. It seems likely that Deutsche Bank holds significant levels of government bonds in the crisis countries. It also continues to have very significant loans and other exposures to the crisis countries in the areas of consumer credit, mortgages and business loans. 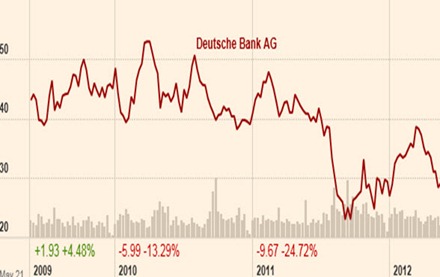 Germany is also not immune from the economic crisis engulfing the rest of Europe. Given that approximately two-thirds of its exports go to Euro Area economies this would be impossible. The latest estimates for output in the whole of Europe are grim, Germany included. This is shown in the chart below, which is the latest Markit/PMI survey for Gemany. The equivalent April survey for the Euro Area as a whole shows a sharp contraction and the lowest level of activity in nearly 3 years. In Germany that reading on this survey has fallen to 49.6, and anything below 50 signals economic contraction. The chart shows the Markit/PMI survey versus GDP (orange line), where the correlation seems to be reasonably strong and points to recession. 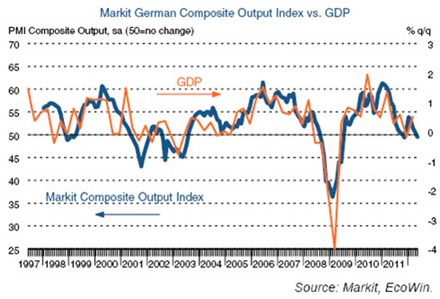 The strategic benefit that Germany derives from the existence of the Euro is being augmented currently by plummeting yields on government bonds and the currency’s weakness. But this loosening of monetary policy can only a partial offset the contraction in export markets, which looks as though Germany too may head back into recession. The notion that Germany can be immune from the ‘contagion’ effects of the crisis in Greece and elsewhere is dangerous self-delusion. The performance of its leading banks already demonstrates the negative impact on German capital, while surveys show the negative impact on German output.

Parties across Europe who argue against austerity are right to do so. If the Euro breaks up the factors providing a loosening of German monetary conditions would go into reverse. Germany would be a very big loser in the event of Euro break-up and threats to engineer that collapse are reckless and ill-founded.

First published at Socialist Economic Bulletin and republished with the consent of the author.