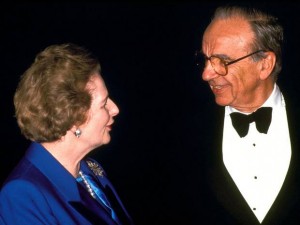 On the day of the TUC’s Media Conference, (March 17th) the release of Margaret Thatcher’s private papers reveal that in 1981 she met Rupert Murdoch to discuss his purchase of the Times, Sunday Times and their associated titles.

The official history of the newspaper claimed there was no contact between Thatcher and Murdoch in the run up to his purchase of the titles.

This astonishing news again shows just how deep Rupert Murdoch’s relations with those at the very top runs.

The meeting was secret and took place at Chequers the Prime Minsiters weekend retreat.

Andy McSmith in the Independent reports: “On 12th February 1981, Mr Murdoch was allowed to double the number of national newspapers he owned, by adding The Times and The Sunday Times  to The Sun and the News of the World. It was normal practice for any bid for a national newspaper to be held up while the Monopolies Commission investigated, but in this case Margaret Thatcher’s government overrode objections from Labour and waved it through. Mrs Thatcher reaped the political rewards for the remainder of her time in office. It could have been embarrassing for the Prime Minister if there had been any suggestion she had privately colluded with Mr Murdoch to ease his bid”

The officials history of the paper said:  “In 1981, Margaret Thatcher and Rupert Murdoch scarcely knew one another and had no communication whatsoever during the period in which The Times bid and referral was up for discussion.”

Documents to be released by the Margaret Thatcher Archive say that Murdoch secretly met Mrs Thatcher for lunch at Chequers, on Sunday, 4th January 1981, with the specific purpose of briefing her about The Times bids, at a time when other potential buyers were showing an interest and Times journalists were hoping to organise a staff buyout.

A formal record was kept, and submitted to Mrs Thatcher the next day with a note from her press secretary, Bernard Ingham, vouching that “in line with your wishes, the attached has not gone outside No 10.”

The record notes that “the main purpose of Mr Murdoch’s visit was to brief the Prime Minister on his bid for Times Newspapers.” Mr Murdoch told her that it was “a firm bid” for all the titles, not just the potentially profitable Sunday Times.

The print unions – “a tough nut to crack”
In another twist Murdoch hinted that he was lining up to take on the print unions when he told Thatcher he had “to crack a particularly tough nut” in the form of the highly organised print unions. Five years later he sacked 5500 print workers in the move to Wapping.

Mr Murdoch wrote to her on 15th January, to inform her that “The Times business is proceeding well”, adding: “See you in New York on 24th February.” By then, the dead had been done.

As McSmith says: “Thatcher needed the media mogul’s support because she was so desperately unpopular. Her subsequent success has obscured the extent to which her government was peering over the abyss in 1981.”

To quote Andy McSmith again: “No British politician did more than Mrs Thatcher to help the rich get richer, and yet all along she privately believes that money does not make anyone happy – except Rupert Murdoch, presumably.”