Tanker drivers to vote to end “race to the bottom” 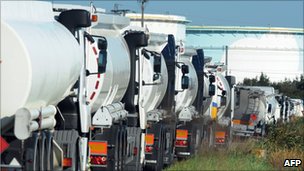 Unite tanker drivers are to ballot for industrial action following a warning to employers that voting would start next month unless the attack on drivers’ terms and conditions ceases.

Unite says that the contractors responsible for the delivery of oil and petrol supplies to petrol stations and supermarkets across the UK had squeezed the pay and conditions of around 3,000 drivers and that letters requesting a meeting were sent to them as well as Tesco’s in August last year but a request for a meeting was turned down.

Unite said that supermarkets and oil companies now contract out much of their delivery work to haulage firms and one of the biggest issues now is pensions. In some cases final salary schemes have disappeared completely.

Unite said it was calling for national standards to stop a “race to the bottom” on pay and conditions.

During the past week some parts of  the press and media have tried to link this legitimate ballot of union members with fuel protestors groups – with a different agenda and have links with right wing political parties.

eroded. Len McCluskey, Unite General Secretary said: “Tanker drivers play a crucial role in the economy, delivering fuel safely and on time, but their industry, which is worth billions, is content to attack the drivers’ pay, pensions and conditions. The price of oil is heading for 100 dollars a barrel, so this is not an industry suffering like many others because the profits are astronomical. Employers have their heads in the sand if they think they can continue to attack these drivers’ terms and conditions.

“This is not about pay. Our demands are very reasonable. We are calling for national standards to bring stability to the industry. It would benefit our members but it would also benefit the multitude of contractors in the industry too. Time and workers’ patience is running out, so we appeal to the key stakeholders to engage with Unite urgently to find a better way forward”.

“Minimum standards on safety and decent terms and conditions are a pre-requisite for success in this sector. The attacks on workers’ pensions must cease and the merry-go-round where drivers can have as many as 12 different employers must stop too. Quite simply, enough is enough.”

This entry was posted in Unite The Union, Workers Uniting. Bookmark the permalink.