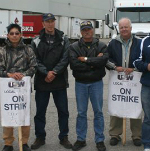 Crown Holdings, a U.S. based multi-national company, (also know as Crown Packaging and previously Crown Cork) is one of the major metal container and specialist packaging companies in the world, producing cans for beverage and food containers in 149 countries, including sites here in the UK.

Despite almost doubling its profits in 2012, Crown has launched its latest attack on workers in Toronto, Canada, where members of the United Steelworkers, (Unite’s partner union in Workers Uniting) were forced on strike. Crown is demanding the elimination of a cost of living allowance; the establishment of a two-tier wage system, and the continuation of an already nine-year freeze on pensions.

These demands came soon after Crown gave these union members an achievement award for their “dedication, commitment, teamwork and personal accountability.”

Over the past two years Crown has taken an aggressive attitude to unions including in the UK where the company rengaged on an agreement reached by Unite members and then declared redundancies.

In Canada USW members have drawn a line in the sand and are leading the “Take-Backs No More” global campaign to stop years of Crown building its profits on the backs of workers.

Unite, the International Association of Machinists, and IndustriALL are building a global union network to stop further Crown’s attacks.

Unite is asking supporters to join the “Take-Backs No More Campaign” by sending a letter to Crown Holdings CEO John Conway.

Unite General Secretary Len McCluskey said: “We are outraged at the confrontational and arrogant behaviour of Crown Holdings during recent negotiations for a new collective agreement between Crown and USW Local 9176 in Toronto, Ontario. Despite the willingness of USW members to reach a fair agreement, you have instead forced employees to make the difficult decision to  go on strike.

“USW members at the Weston plant produce over five million cans a day and were recently recognised as one of the best plants in North America. It is disappointing to know that despite their achievements, Crown has little respect for the dedication and hard work of its employees at both the Weston plant and at other Crown facilities throughout the world. Crown’s demands threaten the well-being of current and future generations of its employees.

“Union members in North America and across the globe fully understand your strategy is to increase profits, after doubling them in 2012, by gradually lowering wages, benefits and working conditions. We are joining together to fight against the erosion of dignity and fairness that Crown is forcing upon its workers. We urge you to act immediately to resolve this issue before further damaging the reputation of your company and the good will of your employees.”