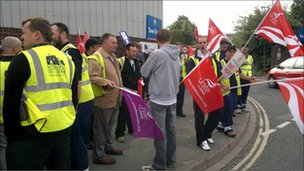 March and lobby of Southampton city council : Wednesday, 13 July from 13:00

Hundreds of Southampton City Council workers will march through the city on July 13th in protest at their employers’ ruthless imposition of wage cuts.

4,300 workers, including librarians, traffic wardens, toll workers and social workers, have been taking strike action since May. They were joined this week by port health workers at the massive port, and hundreds of building maintenance workers as strike action spread throughout the city.

Eight weeks of strike action have hit Southampton following the pay cut imposed on the workforce by the Tory-led council, which has claimed that pay cuts will save jobs and services.

However, such claims were denounced by the unions this weekend as it was revealed that the council was drawing up plans to sack over 1,200 workers over the next three years.

The unions – Unison and Unite – warn that the actions of Southampton council foreshadow what could happen in councils across the country. Last week, Shropshire council told more than 6,000 of its employees that they too would be sacked unless they signed up to a five per cent pay cut.

The unions have been pushing Southampton city council for talks without pre-conditions in order to solve the dispute. To date the council has resisted calls, preferring to have its 11 July imposition passed.

Ian Woodland, Unite regional officer, said ahead of the march: “This is our chance to tell Royston Smith, the Tory council leader, and his deputy Jeremy Moulton, who have led this ideological attack on their own public servants, to talk about a solution.

“The leadership of this council is misusing this office to bully working men and women out of their jobs. If he gets away with this, Tory councils across the country will seek to do the same.

“Southampton city council workers are standing up against these draconian acts because they will not be beaten into submission.”