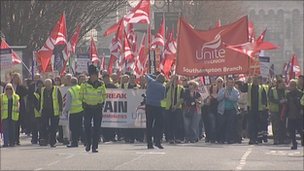 Unite and Unison members at Southampton City Council are to commence indefinite industrial action from 23rd May in a dispute over proposed pay cuts of up to 5.5%. About 2,600 members of Unite and Unison will be undertaking action.

A series of stoppages will also be held, starting with refuse collectors.

The council say that even if staff accepted the cuts in pay they may still have to make further redundancies.

Tory Leader of the Conservative-run council, Royston Smith, said: “I am very disappointed that the unions have voted for industrial action over the changes to terms and conditions.

In February, councillors finalised £25m budget cuts and said all workers earning more than £17,500, which is 65% of staff, would have their pay cut by reducing working hours.

All trade unionists should support Unite and Unison members in fighting back against the wage cuts being proposed by a right wing council.