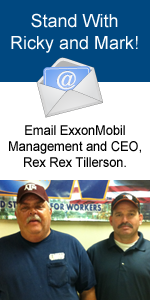 You might be asking yourself, “Who are the men in this picture?” They are USW Local 13-2001 members Ricky Brooks and Mark Schubert from Baytown, Texas and here are a few things we want you to know about them.

We believe that their dismissal is without cause and need your help letting ExxonMobil CEO Rex Tillerson know.

US readers can click on the image above to send an email directly to Rex Tillerson letting him know you disagree with the termination of Brooks and Schubert and demand they be reinstated.