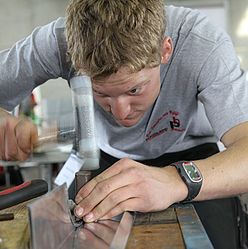 Broad strike activity has secured sizable pay deals in the Austrian metal and industrial sectors. Austrian trade unions PRO-GE and GPA djp, along with the Salaried Employees, and the Print, Journalism and Paper Union, bargaining on behalf on 170,000 workers secured pay awards ranging from 4.2% to 4.4%, with the minimum wage in the sector increasing by €80-per-month, or 5.3%.

The increases were made possible by strategic strikes that forced the employers’ hand in raising their wage offers to above 4%. “We have met our main demands of sustainable wage and salary increases, particularly for the lowest paid workers,” said Rainer Wimmer, PRO-GE’s chief negotiator. “I thank the stewards, members, and supporters who made this deal possible. Without the 800 workplace disputes and the pressure generated by the strikes, this would not have been possible.”

Thanks to Dick Blin at the ICEM for the news item.